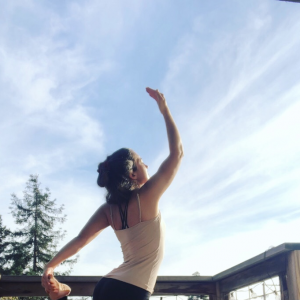 Fall in the Fitting Room

I have gained so much weight so fast my skinny jeans beg to be saved from certain death. Twelve years ago, I weighed ninety pounds. Fall reminds me of riding my bike to the grocery store, picking up Fat Free cottage cheese and going home, picking apart the curds. Sometimes seasons bring us home, and sometime you're just overweight in sweater season, a blessing because it hides all the shame.

I have decided fall is the time of new beginnings. I put on a yoga video this morning. In time with the instructor, I did crow pose and cat cow. It won't help. When I was sixteen all those years ago, I didn't know margaritas taste better than being thin. That chips and guacamole taste better than skinny.

Fall is nostalgic because I am far from home. I flew across the country with two suitcases four years ago last month, carrying mostly clothes. I was a size four. Those days are gone, like the leaves I used to watch outside my window in Boston. They fell and sometimes decomposed, sometimes raked up and put somewhere else. I wonder where they went. Some of them blew away. Fate is often tied up in the seasons, and I like to think of fall as when I decided to buy a one way plane ticket to where I now call home and left the scale behind.

It doesn't ultimately matter what size jeans I am, because fall always comes and Fat Free cottage cheese will forever forward be replaced by margaritas and chips, no matter where we all blow away to.

at what point are you just SAD

like eating ice cream out of the trash can

new status about her eighth grandkid

at what point are you just ANGRY

shaking your head because

it's three months too late

for them to not even apologize

at what point are you just TIRED

sitting in rush hour traffic on a Tuesday

four more days until I can pretend I'm free

at what point are you just DONE

was it their absence or lack of presence

in a full-blown conversation

that led you to block them

that led you to understand loneliness

when you had dropped out

people at a party

get to their level

you’re a millennial about to hit 2023

3
1
3
Challenge
Two sentence horror stories
Try to scare somebody with two sentences. Can deeply describe (Two Sentences!!) or shortly described but make it terrifying so much that the reader will flinch just imagining it!

you’re a millennial about to hit 2023

7
1
7
Challenge
Don't Picture This, Don't Picture That...
Use any form of imagery besides sight (so sound, taste, smell, etc.,) to describe an emotion.

with a side of

that curdles my sanity

I can take a right on red

the cop asking me

I just wanted a salad

Running, but at what cost?

The front desk guy at the gym asked me, do you want a personal trainer? and I said “no” to which he said, why wouldn’t you? It takes eight steps to burn one calorie. I have to reevaluate my life. I wonder how to use certain machines, how some look like guillotines. Is this what desk jobs make us, hamsters on a never ending wheel? I have to wonder if the front desk guy is being cryptic, or if there’s some secret message. In the gym you can be mysterious, just be weary of showing too much skin. Or your weaknesses.

2
0
0
Challenge
Textbook Prompt
Describe any piece of clothing in a certain way that it makes the reader think of joy, but don't use the word joy, happy, or any other synonyms of joy.

If the Fur Fits

home is a fur coat

that the vegans loathe

I try it on

in a thrift store’s

I’m up to my neck

11
5
0
Challenge
Challenge of the Month XXXII
Write a short story: You have all the money in the world and no desire for a home. Make it gritty, make it beautiful. $100 dollars purse.

Unfiltered, as in Cigarettes

In the last scene of Mad Men, if memory serves, Don Draper is in some kind of hippie yoga retreat, blissed out on what I perceive to be endorphins and possibly some hippie drugs. Like Don, I have stepped into board rooms, bored and wanting more. I too want to suck on cigarettes and have disdain for the world.

I do not want money. I have all the money in the world. I want, simply, more.

In another Mad Men scene, Peggy Olson has a cigarette in her mouth as well, this time sticking it to the patriarchal hierarchy in their advertising agency. She is walking down a hallway to her new office, now promoted. She is wearing sunglasses and a smirk.

I don't know who I'd rather be. The lost man who finds himself, or the woman who overcomes. At least Don Draper had a journal he wrote his existential dread in. Peggy, if memory serves, spends time in a mental hospital. Both are extraordinary experiences.

This isn't about money. I want the extraordinary, the cigarette smoke that isn't filtered, like the best writing, or Don's genius ideas.

I'm not sure why I chose Mad Men to describe, poorly, my ambitions, my desire to spend my life on a pedestal, when money isn't an issue for me. Don Draper is kind of, well, disdainful and mean. At the best, he is a successful advertising executive, but is that all there is? I believe his fake identity, as well, led to shame, when initially it might have been a high.

I too want to write campaigns, make a splash and kick dirt at my enemies.

I want to walk into an office building and have a secretary take my coat, make me feel something like powerful. One day, I'll surely find myself at a hippie yoga retreat, overwhelmed with the biggest smile on my face. But I'll have achieved what accompanies some level of fame, and though it's not money, to me, it's better.

All the money in the world, and all I want is fame, recognition, and the ability to stick it to my enemies. A mix of both Don Draper and Peggy Olson, like one of Don's stiff drinks, ice polluting the point, a mystery behind glass. Money leads to this corruption of spirit, an inevitable smirk behind what could only possibly be true talent. But let's call it a successful advertising campaign for what we should all want, money aside.

5
1
3
Challenge
Quote time!
Write a quote. Two sentences or two paragraphs. It doesn't matter, just write a quote you love, hate or it's sad or happy. Be creative! This was mine as an example, "I don't need them anymore. I'm the person they needed, and what they wanted to be."

“The road goes on forever and the party never ends,” he said in his Facebook status. Remember that, in 2007? Perhaps he’s living in a desert - isn’t that where they all go, when the skeletons in the closet get buried beneath us? I thought this account got reported, at least, is anyone listening at the key hole that is my poems? I wonder about people, their words. I wonder if life is a party, or if that road leads to a stop sign somewhere in the tundra, at a red light we call nostalgia.