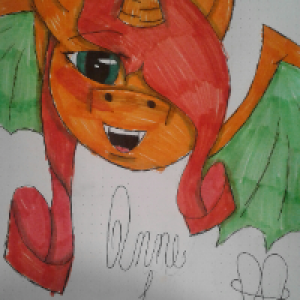 Follow
AnneLGray
"I have no life purpose. Just little day to day ones that I fufill to keep me from feeling like a failure." Anne RedWingsBlack: CLAIMED
64 Posts • 31 Followers • 12 Following
Posts
Likes
Challenges
Books

No way to let out this pain.

No way to fully tell the truth.

I've cut so much.

Flying through the sky.

My heart is pounding

And my chest is heavy.

My lunch is bubbling in my stomach

As bowling balls roll about,

Threatening to set off a land mine.

My skin is burning,

I'm uncomfy in my clothing

And feel immigrated to my skin.

I can't hear my thoughs,

The screams are too loud.

My mouth is desert dry,

My anxiety is heavy,

And I feel SO SMALL.

Her hands clutched at her hair as she wheezed and trembled. Stopit~! She internally screamed at herself, her black magic rearing its nasty head from its prison. Her tears turned to blood, black, tentacle-like magic blooming from her heart, beginning to encompass her. Her control dwindled as the darkness took over. She couldn't stop it... Didn't want to stop it. She shook, her gaze becoming obstructed as she was enveloped in the pouring black magic. In that moment, she lost control of herself. When she woke, the bar around her was washed with blood, her form drenched in it. She hurt all over, cuts scattering her wrists and thighs, her own blood pooling at her feet. The room smelled irony and alcoholic.

She could remember nothing of the prior hour.

But her lover could. As he was off in a corner, surrounded by a shield he'd put up to protect himself. He struggled to explain, having little comprehension of what had actually happened.

"Y-you went wild- The man nearest to you losing his head in one fair strike. You were amazingly dangerous. No one survived."

The woman listened in silence, utterly disgusted at herself. Why didn't she show up to stop me-? She wondered to herself, getting off her knees to begin cleaning her bar.

This is what my cousin said to me yesterday. We were climbing the stairs to this ride I wanted to go on and the line was really long. Nerves were climbing in all 5 of us as we neared the top and I said, "****, don't let me chicken out." Amd she comes over to me, grabs my shoulders, shakes me, and yells in my face "WOMAN UP." And just like that, the nervousness was gone.

I love my family.

I have a weird combination of "Wellerman" and "Welcome to Wonderland" stuck in my head.

I sat on my bed, tears welling in my eyes. What is happening to me? I look up to see my mom come through the door. “Kady?” She looked around my room. “Kadence?!” “Yes mom?” She looked startled and continued to stare around the room. “MICHEAL! KADENCE IS MISSING!” My mom ran out of the room, frantically trying to open her phone. “Micheal!” I followed her down stairs. “Mom! I’m right here!” I said, she turned around, looking for me. “Micheal!” She continued her journey to the kitchen. “Micheal, she’s gone! Kady is gone!” “What?! What do you mean gone?” “I’ve looked all over the house for her, I can’t find her! Her phone is sitting on her night stand and her sheets are messy. She never leaves them that way!” My dad turned on his phone and proceeded to call 911. “Mom! Dad! Listen to me!” They both turned in my direction. “D-did you hear that?” “Yes, Amanda. I did.” My dad hung up the call before he’d gotten an answer. “Kady, where are you?” My dad demanded. “I’m right here! Infront of you!” I warily placed a hand on on his arm, hoping he’d feel it. “Crud. You’re going through it early.” He mumbled, looking to my mom. “She-she’s not-” “Yeah. Yeah she is.” “Um... what are you talking about? What am I going through?” I asked shakily, looking between my parents. “Honey, your going through the morphosion stage. We didn’t expect this till you were almost 18, but, it’s come early.” “W-what’s the morphosion stage?” I asked, tears welling up in my eyes again. “It happens to all those who are of the Avatar species. You’re dad and I.. We’re both half blooded. You have those genes and, well, your going through the same process we did. It’ll only last a day.. But you can’t go anywhere or have anyone over till it’s run it’s course.” “Oh... Okay..”

“GAH!” I breathed heavily as I sat up. I placed a hand to my chest. “Just another nightmare...” I got up and dressed as I ready for school. I bound down the stairs. “Morning mom!” “Good morning dearie-” She looked around the kitchen, seemingly searching for my voice. “Kadence?” “I’m right here mom! In front of you!” She looked toward me, but like she was looking through me. “Wow.. I must call my doctor. I’m halucinating!” I felt tears jerk in my throat. Halucinating!? I raced up to the bathroom. When I looked in the mirror, I didn’t see anything. “A-am I dead?! Am I a vampire!??” I ran to my dad’s study. “Father!” He turned around “Yes Ka... dence?” He tilted his head. “Huh, she must be in the other room.” He stood up and walked right through me.

What is happening to me??

W-would You Still Not Get Mad-?

Would not get mad?

What if every smile was fake?

Would you keep your joy?

What if I kept things from you?

Things you'd never think I'd do?

What if I just put on this grand facade?

Would you still not get mad-?

A tall, thin, white-haired woman in her mid to late 30's sat at the bedside of her redheaded, mid 20's, little sister, who was dying as the woman spoke.

She began, her voice shaky.

Her voice was beginning to hold a tune.

"People've been asking how you've been."

"I'm waiting here for you. J-just come back home."

Elsa sang as well as her voice would hold, tears streaking her cheeks.

"We've always had each other. You and me. I can't bear to lose you now."

A nurse came in, telling the two they could say their final goodbye's before taking her off of life support. Kristoph said his first, kissing Anna's pale forehead before stepping away for Elsa.

Elsa let go of Anna's hand, throwing herself at her brother-in-law, sobbing as the nurse stepped forward, flicking off the life support system. The soft whirrings of the machines silenced and the once repetitive beeps of Anna's heart monitor became a steady siren in the room, alerting its inhabitants that the patient was dead.

The Depths of My LOVE

Hey, can you tell me how many stars float in the night sky?

Giggles. Can you tell me how many grains of sand scower the earth?

How deep is the ocean?

The point is, is it's deep, right?

How far do you think the black of space goes?

All those statistics you just gave me? Yeah, those are the statistics of my love for you.