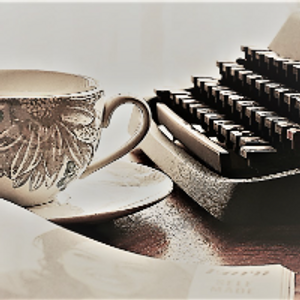 Follow
CindyCalder
From Charleston SC
112 Posts • 144 Followers • 6 Following
Posts
Likes
Challenges
Books
Challenge
Describe someone to me
Someone you love, someone you barely know, someone interesting, your call.

I sat by the fire in the small, dimly lit restaurant, staring at the colorful vase of flowers adorning my table’s center. I was so mentally exhausted from the week of work that my mind could scarce think on anything except the glass of wine that would soon be mine. It was much needed to alleviate the stress running rampant through my body this evening. A young, flirtatious waiter had taken my drink order, but I had not given him a second glance, so preoccupied was I with the disaster of my workweek. It was hard to dwell on much of anything else.

An older gentleman approached my table with a bottle of Château Pape Clément Pessac-Léognan. I was treating myself tonight, and felt I had earned it. As the waiter poured a small amount of the aromatic wine into the crystal glass, I took note of his aged hands. They were strikingly beautiful in a less than usual way. One could easily see that he had used them for something more than serving wine over the long years; they were weathered and worn, much like his wrinkled face.

As I studed the hands that carefully grasped the expensive wine bottle, I was intrigued by the volume of character embodied in them. I wondered what work they had performed during all their years on this earth. They were riddled with protruding veins: it was as if I could feel the blood that pumped through each one.

Distracted, I forgot to taste the wine in front of me.

“Signorina,” the waiter prompted. “Would you prefer something else? Is the wine not to your liking?”

I was momentarily transfixed while I watched him rub his left index finger and thumb together as he awaited my response. Was this something he’d done nearly all of his life or merely a nervous response?

“My apologies. The wine is perfect,” I quickly offered after a sip of the red wine.

The waiter grasped the wine bottle with both hands, so carefully that I surmised he thought it an irreplaceable treasure. Tesoro mio. I smiled at the comparison. My treasure. Yes, this man appeared to treasure the wine as if it were a newborn babe in his care.

I noticed his fingers were long, lean, and elegant despite their evident rugged texture. It was more than obvious they had performed some type of manual labor prior to his work as a waiter, although I could not guess what it had been. Had he been a carpenter, a mason, a butcher, or even an artist? My mind filled with images of a life hard-lived and yet challengingly productive. No, this man had not lived a life of privilege.

“My name is Bella. Might I know yours?” I asked suddenly.

The waiter looked at me in surprise, but then he stood tall and made a respectful bow before he replied. “Sì, Signorina. My name is Gabriele. Gabriele de Rose.”

Gabriele. I knew that the name Gabriele was often associated with healing because of its reference to the Archangel Gabriel. At the thought, an unusual vision immediately crossed my mind: this man’s rugged, strong hands making contact with me and a profound peace ensuing.

I continued to watch beneath my lashes as Gabriele rested his hand ever so slightly on the edge of the table as if to steady himself. The scattered brown age spots on his hand was in stark contrast to the crisp, white table cloth and also revealed he was at least in his sixties. What on earth had propelled a man who obviously had worked most of his life to take a job as a waiter when he should be reaping the benefits of his previous labor? My heart suddenly plummeted, so grave was the concern that his life’s savings may have evaporated and led him to such a path. Furthermore, had I caught the trace a discernable tremor that ran lightly through his fingers. Was he ill? Oh, but I hoped not.

It was exceedingly odd to find such weathered hands so attractive, but still, I did. There was a timeless elegance and beauty of purpose exuded in every gesture or movement they made, including the rubbing together of the index finger and thumb. Like a moth drawn to a flame, I longed to reach out and touch him for some inexplicable reason, but I restrained the impulse as I knew it would be inappropriate and make him uncomfortable. Instead, I did something else.

“Hello, Gabriele. It’s very nice to meet you,” I said and extended my hand.

For a moment, he seemed surprised, but then his face broke into a smile that encompassed its entirety. His eyes began to twinkle, changing his appearance and making him appear years younger than the secrets revealed by his weathered, wrinkled hands. This man had surely been quite handsome in his former years.

“Hello, Signorina. It is very nice to make your acquaintance,” Gabriele said as he accepted my hand. "Please, enjoy your meal, Signorina. And I sincerely hope you will feel much better very soon, Isabella," he added. With another bow and a slight wink, he quickly headed to the rear of the restaurant, disappearing behind a door.

Amazed, I watched him walked away. How did he know how stressed I was feeling? And how did he know my given name was Isabella? I'd only given him 'Bella' when I'd introduced myself. I could still feel the warmth from his strong handshake. Endorphins had already begun to flow through my body, and the stress I felt was beginning to slowly dissipate. Perhaps the vision I'd experienced only moments earlier had not been a precipitous one. No, I was sure the fact this man’s name was Gabriele and that his hands were so beautifully made was not the least of coincidences.

I was still a bit confused as I looked down at my wine glass, but a smile began to suffuse my face; it reached all the way to my tippy toes. It was a good feeling after such a long week. Indeed, perhaps the week had not been such a dismal failure and just maybe my faith in the universe had been restored. Something unexpected and wonderful had occurred this evening, and I found myself on the receiving end of it all. It was not every day, after all, that one met an angel with wondrous, healing hands. And because of it, life suddenly seemed full of endless possibilities.

1
1
1
Challenge
Love Poem
Write a poem to your significant other. If you're single, write a poem to someone you are infatuated with.

Myself with the essence

Of you each and every

Moment of this life.

In dreams, I oft

Pretend I am the

In the warmth of your

Curl them about me,

Until your task is done,

Then neatly place me

Of your jacket pocket,

Ever near to your

There I would remain

Until my dying day.

You will always be the

Beginning and the end

Of what I desire

In our brief time.

To be loved by you,

0
0
1
Challenge
Love Across the Stars
Write a short story or poem about a long-distance relationship across different planets or galaxies.

"Maybe in some parallel universe we found each other.....we are meant to run toward one another....chances are, I'll never know." Erin Van Vuren

Of awareness and revelation.

I stretch out my hand

And touch the air.

I can feel it:

Of a parallel universe.

From the other world

You step in, a seeming

Vision and not reality.

Yet, when my eyes

I know the secret:

Into my sphere of time.

All thought is suspended,

I desire it all

But you are only mine for

A mere macrocosm in time.

You know it, too:

To the depths of our being.

But of a sudden,

A flash of light,

You are gone and

Our time has vanished.

Remain in the dawn.

Of love so divinely felt

Disperses in the morning air.

You aren't even a memory.

To find our destination:

Is suspended in time.

We are none the wiser

Nor will we ever know

The treasure that was missed.

Now and always, please just hold that happy thought, Peter. You are a symbol of all humankind: easily frightened, defensive, and then utterly, gut wrenchingly remorseful. Even still, you are, in fact, purity personified in your nature: a green flourishing pasture as well as a massive rock upon which so many will stand. You are chosen, anointed, and a gift most rare amongst all others. Look into yourself and always know from whence you came….and to where you will always venture forward.

Once Upon a Time

The air I breathe.

Once upon a time

Ashes of our love,

Desolate garden of my heart.

2
1
6
Challenge
January Acrostic
Write an acrostic poem using the letters of January as the first letter of each line.

Nestling in the trees

You, child of winter, are at peace.

And opens the mind

The essential essence of awareness.

Virtuoso of my heart

Splendid counterpart to my soul.

5
2
2
Challenge
I Want To Believe
Write about aliens/UFOs/space. Any format.

"Maybe in some parallel universe we found each other.....we are meant to run toward one another....chances are, I'll never know." Erin Van Vuren

Of awareness and revelation.

I stretch out my hand

And touch the air.

I can feel it:

Of a parallel universe.

From the other world

You step in, a seeming

Vision and not reality.

Yet, when my eyes

I know the secret:

Into my sphere of time.

All thought is suspended,

I desire it all

But you are only mine for

A mere macrocosm in time.

You know it, too:

To the depths of our being.

But of a sudden,

A flash of light,

You are gone and

Our time has vanished.

Remain in the dawn.

Of love so divinely felt

Disperses in the morning air.

You aren't even a memory.

To find our destination:

Is suspended in time.

We are none the wiser

Nor will we ever know

The treasure that was missed.

It only comes but once.

You feel it move,

It’s in the air you breathe,

Every particle of dust,

And every shiver felt.

This moment will not occur

Nor cross your path twice.

Clasp it to your bosom,

Standing amidst your doubts.

Or linger in indecisiveness.

The chance is nigh

Which path will you choose

As you teeter totter

On the cusp of love?

Stretch out your hand,

What lingers on the precipice.

If you but beckon

Them with all sincerity

And with your soul.

Until at long last

The universe will be yours.

For into the rare eclipse

Of love will you fall.