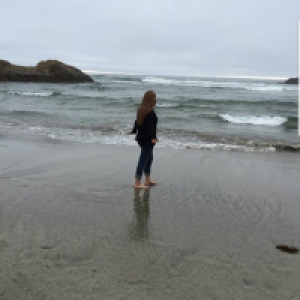 Follow
ElizabethGreen
I've found that the best way to cope with life's unexpected happenings is to pick up a book or pick up a pen.
15 Posts • 18 Followers • 8 Following
Posts
Likes
Challenges
Books
Challenge
To any gamers on Prose, describe your favorite video game in 100 words or less.

An ocean planet crafted with so much beauty. Creatures large and small, underwater mountains, forests, caves, trenches, reefs... all waiting to be explored with your eyes and the machines you craft.

Imagine diving deep into the unknown.

But you must be cautious. For you are no longer standing atop the food chain, glancing down at your pickings. In this world, you are on the bottom. And these creatures could care less about what you are. Often times, you are the prey.

Subnautica tickled my imagination and kept me on the edge of my seat the entire story!

You fell in love

with my pretty flower petals

clueless to my roots underground

So when the storm came,

and the frost took its hold

you were nowhere to be found

Thanks for the challenge!

Callous, yet gentle paws that kneaded me in the side as she slept... she whined and twitched as she chased after the creature in her dreams.

(or, maybe, she was chasing after me?)

Eyes, ears, and a tail that spoke a million words because her lips couldn't pass anything more than a bark.

Her soft, pink nose that poked mine to show me she loved me.

A dog knows not their purpose except to serve their owner.

They provide a quiet comfort in dark times.

They greet us at the door.

Everything they do is for us.

And they don't even know it.

We take them for granted sometimes, I think.

I wrote this tonight as my dog lay curled around my feet. It's messy, and I have a lot more on my mind about all that my dog does for me. I just couldn't fit it here where it would make sense. Maybe another piece, another time.

My soul fell for you

as the leaves took their plunge

and then all at once

I recently found this piece in an old notebook I carried around with me in high school. I probably wrote it about five years ago.

she writes for the restless

she is their voice

off the shadows in her heart

those who are too weak

to utter even a sough

they turn their heads

the giver of words

and she composes their ascent

my love for you is neverending

dark trenches and the unknown

yet beautiful and captivating

11
3
0
Challenge
Your life is in black and white until you come in contact with your soulmate, which makes everything turn to color. Describe meeting your soulmate for the first time.
You can put it in any POV or setting. You control everything, from gender to genre. Have fun!!!

One foot after the other. Clud-clump, clud-clump, clud-clump. She could feel her heart beating on her ribcage, could hear it in her ears. It was a dull, but an ever-present reminder not to push herself beyond her limits. She slowed her sprint down to a jog and whooped in a breath of air. It tasted of saltwater and the redwoods that lined the coast— hah, “red” woods. How could she really know what the redwoods looked like? Funny name. Turning, she glanced out at the mouth of the bay. Gray sky. Dark, slate-colored clouds. The seafoam was frothy gray-ish white. The waves were a rolling midnight black. The sand looked more like ash. Everything gray. Everything lackluster. All her life she had heard the stories of color. And yet, she had never been able to see them herself.

Her feet finally came to a halt and she rested on a bench on the cliffside, overlooking the shore and the somber openness of the sea. Her eyes squeezed shut in frustration. As a little girl, she’d blink tight and hope that when her lids lifted again, her eyes would change, and the world would come alive.

“I love you, mommy, isn’t that enough?” and her mother would chuckle.

“It’s a different kind of love, my dear, that will bring color to your eyes— and to your heart. You’ll see.”

Her mother had described the different colors to her as best she could. And, eventually, she was able to decipher which shades of gray matter were which “color”. Her mother would smile and tell stories to lull her to sleep at night, remembering the first time the world came aglow.

“I met your father at my senior prom. I went alone. I didn’t have a date, I just went with my girlfriends. We all had a time picking out our dresses. Jennine could already see. She was the only one of us that could already see. She was so critical about which dresses looked good on all of us. We didn’t really care, though, most of us couldn’t see yet. But that all changed that night, for me.

I entered the gym. There were balloons that covered the view of the ceiling. Streamers were stretched across the lights that hung high above the basketball nets. They really jazzed the place up… but I had no idea how beautiful it looked until I locked eyes with your father.

The first thing I noticed were his eyes. His eyes changed. They bloomed into a beautiful blue.. like yours.” The little girl turned to look at herself in her bedroom mirror.

Gray. Nothing but gray.

“His eyes came alive and before I knew it, colors were appearing all around me. The lights, all of the dresses and suits surrounding us, the floor… I looked down at my hands and for the first time, was able to see what my skin looked like. What I looked like. I looked down at my dress, and—” she began to laugh. “—Ah. I hated it. I thought it was such an ugly shade of green. Now that I could see it, anyway. And your father. I thought he was handsome before. But he came alive with color. My world was changed forever.”

The roar of the ocean as it spun and crashed onto the ash pulled her back from her thoughts. She concentrated with all of her might, and her eyes fluttered open.

Sure, she wasn’t the only one in the world that felt this way, but that didn’t help. It was unfair. It was unjust. It was completely and utterly arbitrary for a person to not know the color of the sky they looked up at every day, or what shades of green blanketed the trees that lined their street, or how their friends or loved ones actually truly looked… or, the color of their own god damned eyes.

What if they aren’t out there? What if I’m destined to be blind forever? What kind of a life is that?

Her eyes sunk down to look at her feet, and for half a second, her thoughts came to an abrupt and sudden halt. It seemed the world had stopped as well. It paused for just a moment— she nearly choked on the breath in her throat. The shrubs by the bench began to change.

They morphed from a slate-gray to a dark green (at least, she thought.. she was told all her life plants were green… is this what green looks like?). And the color spread to the dirt underneath her feet. This was a rich brown. Tears welled up in her eyes. She wanted to will them away, for they might blur her vision of the change. But she could not stop. Is this really happening?

The colors spread across the cliff where she stood. It reminded her of when ink met water. Or when you would dip your paintbrush in a cup of water to clean it.. the colors bloomed outwards until they were blanketing everything in her view. The ocean was more beautiful than she could have ever imagined. A dark, swirling blue. Crimson flowers on shrubs that lined the trail. She touched one of the petals with her thumb and forefinger. It seemed crazy, but she believed it even felt different now. The sky, though cloudy, seemed to glow with life. It was gray.. but it was not the same, lifeless gray that she had seen for twenty-three years. The world had shifted on its axis. She stifled a cry and cupped her mouth with her hand. If this was real, and not a dream, then where was…

She didn’t register the sound of feet plunking through the dirt on the walking trail. A young man, just as in awe as she, had been chasing the colors as it bled a path up the cliffside. His eyes finally rested on her.

She spun on her heels to face him. Tears brimmed her eyes. She looked at her hands, her feet, the ground between them, and then her eyes finally found his. They, too, were what she thought was “blue”.

A quick blarb for this challenge, as she is finally meeting her "soulmate" and seeing color for the first time. I feel there is more to be told here, a different time maybe.

Do Me a Favor

do me a favor,

2
1
0
Challenge
"In another world, maybe....."
maybe.....you'd kiss me. maybe.....we'd go see Hamilton together. maybe.....she would've laughed at me. The possibilities are endless. The story is open ended. Tell me what could've happened in another world and why it can't happen in this one. Why is the world we live in so flawed? Please tag me in the comments, I'd love to see your work.

In Another World, Maybe...

Maybe you wouldn't have been in that accident.

Maybe you wouldn't have lost yourself

and gotten hooked on the opiates.

Maybe you wouldn't have crawled into a bottle

and stomped on your children until

Maybe I would have had a normal father.

Maybe I wouldn't have grown callous.

Maybe I wouldn't have finally counquered my fear

Maybe I wouldn't have mustered up enough courage

and excelled in college.

Maybe I wouldn't have grown

Maybe I wouldn't have bloomed into

someone I could have never been

Maybe I wouldn't have grown

In another world, maybe,

who I was meant to be.

2
1
4
Challenge
Challenge of the Week CXLI
What do you Desire? Fiction or non-fiction, poetry or Prose.

how I long to be