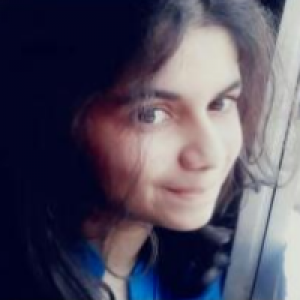 Past the high rise buildings and

the small and cosy coffee shops ,

With their signs turned around.

Against the broken alleys.

As she heaved and breathed

And rubbed away the perspiration

Which rolled down her chin

And down to her breast

Where she had fondled

all those distant memories

With care and passion .

She held on to the single jewellery

That could act as his remembrance.

He who had gone away to the skies .

To a world of peace and tranquility

And joy and immortality.

But she was still there .

Still yearning for him in the mortal world.

With just the one memoir

that he had left behind

Only the diamond bracelet.

"Its okay. I understand your sentiments, but why did you have to run away...why couldn't you wait....and have patience?

The streaming crystal blue eyes met the green ones, as the brunette lady held the hand of the tall red haired man, and gave a watery chuckle.

"Because... I loved you Ben. And I love you now, and till my last breathe I will continue loving you. I couldn't bear seeing you like that.I ..."

Suddenly a loud thud interrupted her. She looked around in surprise and fear, but found no one around except the distant music made by the fireflies . Her blue eyes scanned the area vividly , but found nothing unnatural but a dustbin that  was rolling upturned on the spot from which the sound had come.

"I need to get going. Robert might be waiting for me, and he gets dead mad everytime I return home late."

"Those things need perfect time and situation to explain. And at present...I have none of both. So...we need to wait for the perfect moment it seems."

"I am quite scared of that Robert. I'm afraid he might do something rash..."

"Oh...Don't you worry. I'll keep him under control." She said quitely, smiling her most beautiful smile.

As she quitely slipped into the large and airy room, her eyes automatically went to the wall clock. 11:00 clock. She was terribly late!! Whatever was Robert going to say??

The dark haired man was sitting on the burgundy  queen-sized bed , and apparently, reading a book. He slightly lifted his head from the book and looked questioningly at his wife.

"Where were you? I had been waiting for you  all evening. Had fun?"

The lad now putting the book aside pierced his brown eyes into the blue ones. "Brenda, you have known me since your college years, haven't you?"

His question seemed ....normal. Yah, they were back to normal talk now...or was it? Brenda could only squeak a soft " Yes." as the answer.

But Robert seemed to be enjoying the situation. "You remember a boy called Ben Johnson who studied in my year??"

Brenda almost fell off her chair? What the hell was he talking about!!! Yah, it was true that in her college days, she had seen  Ben bully Robert to no ends. But ..that was years ago. Why was he remembering Ben now all of a sudden? Did he...no no no....that was impossible . How could he know?

But even while reassuring herself that everything was alright, the girl could sense that something was wrong.

Something was not right. Crap. If only she knew how to perform Leglimency.....oh...Why was she blabbering unscientific things now?

Suddenly,  Robert's face became immensely red. He lifted up his finger at Brenda as a form of accusation as he said,  shaking with anger, " You broke my trust Brenda. I loved you but you couldn't keep it!"

Brenda pulled back, her face white in horror. "W-what are you...."

"I know everything now. I just wonder for how many days has this been going on for ..."

"... No wait Robert. Please listen to me . I've got to tell you something iimpo- "I am not going to listen to any important word of yours. I - I trusted you , but you broke it!."

Brenda caught herself up and looked at the brown eyes serenely, " What will you do?

And with that, he stormed out of the room , leaving Brenda to gape  at him in horror and bewilderment. Whatever was going to happen?

A man's voice called from within, as sound of footsteps ran hurriedly towards the door.

"Good day Ben. Having fun all these days??"

Ben stood dead on his tracks. After all these years... Robert...

"You have done enough harm to me in all those years, but you are still not satisfied?? Now you are up to destroying my life??"

Ben staggered back in nervousness.What the hell was he talking about??

"But I won't let you take away the most precious thing of my life. No!! I'll finish this here and right now!!"

In Ben's utmost horror, Robert pulled up a heavily loaded rifle from his pocket and directed it at him.

Robert jumped in surprise. "You are getting it all wrong Rob. ALL WRONG!!"

A brunette haired girl stood at the front door, her wrists closed in immense anger and fear.

"You think you are going to finish this , aren't you?? Do you even know what you are talking about??" She screamed uncontrollably.

"Your trust??" Brenda laughed sarcastically."I was never in the knowledge of anything called your trust. Because...if you would have trusted me...you would not have  doubted my love for you. How could YOU THINK THAT I WOULD CHEAT ON YOU WITH MY BROTHER???!!!!"

My hands would never be clean again ( inspired from Lady Macbeth)

The blood of my guilt,

I’m roaming about in the terrace ,

The silks of royalty at my feet,

But not a single gem,

Can quench my thirst

What is wrong with me?

Why’s the smell of my sins

Sticking to my hands

In vain do I try to

And dim them with

All the perfumes  of royalty.

Royalty, did I say?

They are the perfumes of my greed .

My sins, my cravings.

How will they fade the scent of guilt? How will they stop me from clutching on to the majestic silver  weapon,

And slashing it against my venomous skin?

Why I don’t Celebrate Valentine’s day

I was skipping up and down the broken lane. Today....today would be the day....

I could already hear his wonderful musical voice from there. His gentle warm hands, touching my blonde hair , rechristening all those memories that we had left years before. But now, it was time to give them a new name.

My happiness knew no bounds , when I found out his address from Sarah. Tears had welled up my eyes, as I thanked her profusely and set out to surprise him. I could already see his blue eyes gaping at me in wonder and excitement.

Today I  would tell what I could not tell five years earlier.

My heart began fluttering when I reached the iron gate of his house. The moment...the moment....

I looked up hopefully to see his awestruck eyes looking at me in wonder and excitement, but saw a sickly looking woman looking down at me curiously.

"Can i see Mr. Thomas Pattinson??"

Suddenly a shadow of grief came over her already sickly face as she said ,