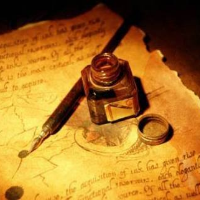 I see every opposite thing you're seeing through me.

Don't be hard to yourself.

I Saw Her Today

Her hair everywhere because of air

She doesn't care because of the babe she handles with care.

Three years it has been

Since the last time her smile was seen

Three years since her eyes

Melted the heart which was coated with ice.

I know she's seen me too

Unlucky I know her well too

She's changed everyone would say

How could she not after everything anyway?

She's not as happy as before they said

I know. After everything that's done were made.

I saw her today and approach her

Fear and panic obvious in her

The babe tried to catch attention

He cried. She ran as if she has a mission.

Handing the babe to another woman

She walk towards me with no facial expression

This will lead us to conclusion

She became everything she promised to be not that day.

The woman facing me whose face before is full with fear,  laughter and panic.

Is now in front of me like masked with some mechanic.

12
6
4
Challenge
You were reading a famous book in a cafe, when you heard a loud explosion, you turned around, the main character in the book you are currently reading appears where the sound came from. Who is your character? What did he/she do? What would you do? Let us say you're the only one who knows who they are. Write a short story about your point of view and his/her point of view. Use #FictionComesToLife Don't forget to tag me.

I know it's getting late,  it's around nine in the evening,  I should be at home but no,  I am here in JCo sipping  my white choco frappe with double shot and my two alcapone donuts and glazed donuts untouched.  It's not I don't like tHem, in fact they are my favorite,  it's just I can't get my eyes off my book.  It's about to end anyway.

Then a loud explosion from the outside of the cafe was heard,  everyone panics, it was chaos, everyone's heading to one direction. In the midst of them I saw a man sporting blue-tinted glasses with weird clothes holding a lamp. At least in my opinion it is a lamP an old style lamp.

Then my eyes travel down on my book again, it was opened on the page where the once lovely man, Crisostomo Ibarra became Simoun, a wealthy bearded jewelry tycoon sporting blue-tinted glasses who came back to avenge.

Tha man outside the store, it was him, it was Simoun.

The lamp he's carrying is actually a bomb!

I ran to him to calm him, "Don Ibarra, mag hunos dili ka" (Don Ibarra, calm down).

"Sino ka, nasaan ako? Kailangan kong ipag higanti ang nakaraan" ("Who are you, where am I? I need to avenge the past")

I was just about to answer when he disappeared into thin air again.

Okay first of all,  this novel I am talking about is actually a novel written by the national hero of the Philippines,  Dr. Jose Rizal.  It is called El Filibusterismo/ Ang Pilibustero it means enemy of the government or "The Reign of Greed" in English. It was the sequel to Noli Me Tangere which means Touch me Not.

2. I have already forgotten the plot of the story, my niece just asked me what haooened to Ibarra (Simoun) in the first book because she's reading it so I've decided to use ElFili here.

3. Erehe means enemy of the church

Filibuster means enemy of the government/state.

So the title means The Enemy of church and state.

Correct me if I am wrong my fellow Filipinos

Hello everyone,  I am from the Philippines I am 25 years old.

I chose to use a Filipino username here in the prose,  and I also intend to write in my native tongue which is Filipino.

Pluma at Dugo, my username literally means QUILL AND BLOOD.

I chose this username because I do believe that every writer writes not only with our electronic devices or paper and pen but with our hearts which function as a pump of blood.

I intend to use this site to write my heart's content in every possible way whether in the form of poetry,  prose,  haiku or any form of literature in my language and in English.

I do not know if there are Filipinos here but I hope so.