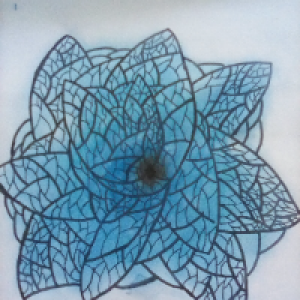 Minding his own bisness. Keeping to himself. Looking down at the ground because he didn’t want to attract attention. Stay quiet because if he doesn’t he’ll get harrassed. Watching in front of him because objects can appear from anywhere. Keeping his ear open to hear movement and catch anything they could say.

These were all things Moxie did. They were things he did because other’s at the skatepark didn’t like him. He was always alone, never bothered to interact with anything else and never came with a group of people.

He became even more unliked when a girl dear to everyone there had gone missing. He’d been the last person seen with her.

Everyone labeled him as dangerous. The other’s didn’t care that no one had actually seen anything. He was a threat.

The passed few days there’s been someone new at the park. Someone no one knew. Although, for whatever reason, he talked to Moxie. Moxie of all people. No one liked that.

It had been a little less than a week when the new guy didn’t visit the park, leaving Moxie back to his routine. Although... Moxie had fucked up yesterday. And he fucked up bad.

Holding a switch black to one of their throats wasn’t going to fly, no matte the circumstances. They didn’t care. He was a threat and wasn’t to be trusted with anything.

Moxie was just skating on his board, in the middle of a turn when he was shoved off, catching himself on the pavement. He didn’t need to turn around to know what was happening. He was about to get beat down on.

He moved into a sitting position, looking up at his assultant. It was Adalyn who was looking down at him, her hands loosely hung at her side.

“Word has it you tried to slit Noah’s throat yesterday.” She crouched down to his level. “Y’know what that means, Moxie.” She said the name with venom sewn into every letter.

He looked up at her, Adalyn being several inches taller than him. “He’s the one who attacked me in an alley.”

The taller lady giggled. “And you think I care? I’ve looking for a reason to beat the shit out of you for a while.”

Moxie gave a small sigh and closed his eyes. “Have at it.”

The first punch was rained down on his nose and he could feel it crunch under her fist. Needless to say, for the next few minutes, he was going to be in some pain that would never end.

When Adalyn was finished, she took a step back. The only really visible injeries were probably his broken nose and a few brusies on the side of his face. Needless to say, his body was in pain just about everywhere else.

She flicked her wrist, blood covering her hands from his bloodied nose. “You wouldn’t have to deal with this if you didn’t muder Spike, Moxie.”

”What-? You wanna tell me we don’t know she’s dead? Please, it’s been eight months.” Adalyn looked down at him in disgust. “We didn’t even get to know her name before you went up and stole her life from her.”

Moxie goes blank for a second before his lips curl into this... twisted smile. He giggles. ”You say you wanted to know her name?” Another pshychotic giggle erupted out of him.

Adalyn looked at him. He face twisted into that of anger as she gripped at the collar of his shirt, bringing him up to her level. ”This. This is how we know you killed her. Your fucking insane Moxie.”

His smile fell from his face. “Her... name,” he muttered.

Adalyn cocked her head a little. “What was that, you bastard?”

He giggled a little before a synical smile danced it’s way onto his face, a terrifying demor taking over him. He giggled a manical giggle. It was almost sad.

“Her name was Annabell.”

3
0
5
Challenge
How do you make decisions?
I'll be honest...I suck at it. So that's why I need suggestions!

In all honestly, I suck at making decisions too. That’s why when I’m indecisive, I use one of two methods. One is for when I have other people around, and the other by myself.

First, pick a number, or as I sometimes call it, “PAN”. This is for when you have other people. So, how this works is you assign each option a number and then ask that person to pick a number between the amount of options you have.

Second, google’s infamous Roll a Die, or “RAD”. (I know, stupid. I can’t take it seriously either.) So, type in “roll a die” into your browser if you don’t know what this is already. It should pop you up with a six sided die. Use which ever die you need to that’s equal to your amount of options or cuts it in half.

Honestly you could just use the first option if you have a phone, but I use that die method as I don't have one and I can't always get ahold of my friends.

I hope you found this helpul!

Normally this day is a day I'd rather forget, as my mother isn't the best. Then, I was graciously reminded by my bean of a sibling that we have a mother that's not related to us by blood, but by bond.

So, my dearest Devon, happy Mother's Day. Even though you're not even a year older than me, you're more of a parental figure than my birth giver has been.

Love isn’t a word I use lightly. It’s or people who I believe are importaint to me. I love you for who you are as a person and I would gladly love to spend the rest of my life with you, lover or sibling.

When I say I love you, you are no longer a friend to me. You are either now apart of my family in some way or you are the one person I hold close to my heart in a diffrent light.

If I love you in a famial way, then you’ve just fucked yourself over because you are not getting rid of me, no matter how hard you try. Romantically... that’s a very diffrent story.

My point here is that the way I love you will only change with how you do. That being said, you’ve already breached my trust issues barrier and my anxiety too. You’d be someone I actually, really enjoy being around. So, I doubt that my oppinon on you will ever change.

You might think I’ll get mad if you do something I don’t like, or if I found out you were degrading yourself as less importaint but that is far from the case. If anything, I’d be sad. Sad because you think that I’d get so upset over things that I sometimes do myself. I honestly would’ve thought that you thought better of me. But that’s not the case.

But hey, we all have our issues, right? One of of them may be trust, and that’s okay. Or to feel the need to be absolutly perfect for me or someone else, dispite the fact that I want to see you as you and not who you think I want you to be.

And that's okay, I suppose. Just another barrier I get to break.

I question my relationship with my sister sometimes.

This sounds so bad out of context and that's what makes it amazing.

(These are all things they said, not me.)

3
0
2
Challenge
What if “straight” was the minority?

1.) Over poulation is less of an issue, there not being as many stright people to have kids.

3.) If gay couples wanted kids, I would think they would have to adopt so less of children without homes.

4.) I feel like kids would be more comfortable in how they are growing up.

5.) Everything would just be fucking rainbows-

Now, a list of things that could get worse/stay the same.

1.) Heterophobia could imerge. (More than it already has.)

2.) Abusive people still exsist, so the fostercare system could still be in place.

I honestly can’t think of many downfalls, but we don’t live in a world where the “straight” are the minority.

Right now, just love yourself for who you are. Embrace your gay if you are, I guess.

4
1
18
Challenge
Annoyance
What is something that annoys you greatly? No one will laugh, feel free to share anything here, please tag me!

When people doubt/blame themselves irrationally. It's just makes me want to slap 'em. I cannot stand it when I hear someone start to blame themselves over something stupid. I have litterally said to someone: "If you don't stop fucking pitying yourself and fix the goddamned problem I'm either going to do it for you or I'll let you suffer."

It's very annoying but I'll only do it if it's irrational.

5
1
0
Challenge
Letter to Someone You Hate
Write a letter to someone you hate. Not a letter of forgiveness, just one justifying your hatred for them. Prose only in letter formatting. 150 word minimum.

When you happened, I thought you were good. I was wrong. Never in my life have I been so wrong about someone. You were manipulative. An attention whore. A bully. A drama starter. I went off on someone on your behalf and to that person I will never be able to stop apologizing because I defended someone so horrid.

You manipulated me. You manipulated my family. You broke people who loved one another apart for your own personal gain. I despise you, and I doubt I will ever want to be in your company again. Just looking at you makes me uncomfortable.

I live by the motto: “Just because someone did something bad, doesn’t mean you should forget all the good they did.” Unfortunatly for you, I can’t think of a single good thing to weigh out anything that I listed.

You may kindly fuck off,

8
4
7
Challenge
The Writer's "Skills"
What are five of your "skills" as a writer? Meaning...technically, they are not helpful, but they make you (the writer), you...a writer. (I'll give an example, since I'll also be entering this challenge)

Writing Skills? I think not.

1.) That random burst of motivation that disapears within the next 20 minutes.

2.) The fact that writing keeps my hands busy if I’m anxious or just need to to move.

3.) I write the fuck out of promts. Not like, sitting down and thinking for a minute. No. Just, in my room, alone, witing on my arm with a pencil, pen, or marker.

4.) Picking out words. Just random words and creating a story out of it. For exsample, “Leash.” I could write a story about how the government keeps leashes on people in a distopian society. (I might do this, actually)

5.) When I'm bored and feeling alone without my friends, I normally turn to writing to keep me busy.

HOW THE FUCK DOES SNOW WORK?!

APRIL FUCKING 23RD AND WE HAVE SNOW-

AN INCH OF SNOW?!