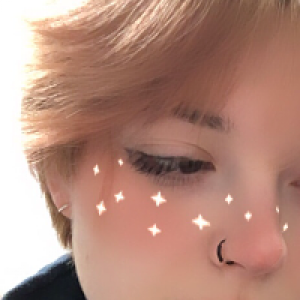 Follow
TeaRise
A word Can describe nothing Or everything. Every word I write Has purpose. I Have purpose My life Has purpose Words are my purpose.
184 Posts • 386 Followers • 107 Following
Posts
Likes
Challenges
Books
Challenge
Love?
write about (romantic) love as a person who has never been in love before. i wanna see what your *ideal* of love looks like. would you let go of it for a chance at something good? romanticize love, or maybe talk about a steady home.

There exists within them

A quiet understanding of my world.

They see the concepts

That words don't exist for;

The ones that structure my existence.

They knew from the beginning

That it would take them

And yet they still sit here

Between the things I already know.

Knitting me without a pattern

Because they know I don't have one,

Nor do I have the desire to predict

How they will change me.

They are tethered to me

Not with conversations and interlacing fingers

And instead leaning upon

all i ever wanted to do was breathe

7
2
1
Challenge
"Success is to be measured not so much by the position that one has reached in life as by the obstacles which he has overcome." - Booker T. Washington
Write about overcoming obstacles in your own life. Any format. 500 word MAX.

alex6 in Stream of Consciousness
• 17 reads

and it hasn't been the best.

"maybe it won't ever get better,"

couldn't see past the darkness.

I was told I wouldn't make it.

"How will you survive real life

if you can't survive high school?"

"How will you have a job

if you can't talk to people?"

"How will you be loved

if you don't put yourself out there?

If you aren't even sure love is real?"

And I believed them.

I couldn't talk to people.

Anxiety and depression controlled me.

too many had shown me I shouldn't.

And I didn't believe in true love.

My parents convinced me marriage would just end in hate.

Then my heart got broken

and it was the lowest I had ever been

and probably ever will be.

But it made me grow.

It finally destroyed me enough

for me to seek help.

I went to therapy

and slowly my mind was convinced

that not all my thoughts are real or true.

Not everyone hates me.

I am creative and funny and hopeful.

People like me and want to be my friend.

So maybe I'm not rich or famous

but I have a job

and I have friends

and I talk to people.

And that's much more than I thought I would ever be able to say.

there are some things

who played with a lighter

and caught his Christmas tree

5
1
1
Challenge
Love’s Sorrow
Write your experience with heartbreak, any form and format. Let your pain bleed on the page, shout it from the rooftops or whisper it in a dark corner of the bar. Let it all out and realize you’re not alone, we’ve all been there and will always be there for one another.

I stained my new blanket with three days

a lingering fire in my eyes

and a hovering shadow on my spirit

finally to be lifted by a new authenticity

clicking dial on your phone

to answer in woodstained pleas

to regret the seconds with you

more than those seconds without

vacuum seal, then, your

wallet-sized heart. tuck it away,

Stargazer, to mold your own world

speckled with those lonely

long as you're unreachable on

the other side of my phone

11
4
4
Challenge
Interview You
Answer these interview questions. 1. When did you begin to write? 2. What does writing give back to you? What is your ultimate writing goal? $25 Prize for the best answers.

“To find the journey’s end in every step of the road...is wisdom.” - Emerson

I wrote my first historical fiction when I was eleven, about 15 handwritten pages that each contained a chapter with a different narrator. All lived around Johnstown, Pennsylvania in 1889, and each witnessed an event attached to the flood that destroyed the town. The sixth-grade teacher who oversaw the writing club was deeply impressed. That story, now lost, represents my first writing. I choose it for my origin because I had never before put so much effort into a piece of writing, or experimented with a narrative in any way, or put written anything I would later remember. Since my first novel (in-progress) is also historical fiction, recollecting my Johnstown flood story also feels like drawing a circle.

It is a circle with several missing pieces and drawn over many years, though. In high school I wrote some poetry and in early college some short stories (hopefully unremembered by anyone, as they were awful), and then I did not write anything for a long time. I never took a creative writing class. Five or six years after graduation I picked at an abortive attempt at a novel for a few months; a couple years after that I labored on an essay that I submitted to a few journals, but I understood too little about both writing and publication to succeed. In the years after that piece, I dabbled with ten-minute plays.

In all these phases, I hoped for an editor to accept my work for publication. I have never expected to make a living with writing – I am a teacher, and happily so – but I wanted validation and an audience. Those desires, in hindsight, missed the point of writing because I valued the goal above the process.

Writing has provided me with a place of escape and control. I resumed writing in October 2019, and when March and the pandemic struck, writing became vital in ways I had not expected. It provided me with an ongoing project when so many aspects of life had ceased, and with time eddying endlessly and case counts swallowing attention and energy, writing presented a solvable puzzle. A sentence must be rearranged, a paragraph shortened; a bit of description must slow the pacing of the dialogue, or a word switched to further shade the phrase’s meaning. A story is unlocked one absorbing step at a time, and entering into this work with all my mind brings a clarity and a freshness that I treasure.

My writing goals have changed. I received the publication I sought: I’ll confess that valuing the process over the prize became a great deal easier with that particular primate wrested from my back. I have stories and poems still looking for homes and currently under review by editors; I hope they find the light of day soon, but beyond my willingness to prep more submissions, that is out of my control. I have 68,000 words of a projected 90,000 words of that novel written, and I want to finish. I anticipate writing the final sentences of The Ghosts on the Glass early in the summer of 2022. I’ll spend the remainder of the summer editing and sending out my first queries to agents. I do not know what will happen, but I will take my shot. Perhaps stars will align and a press will publish my novel; perhaps my search will end a couple years and dozens of rejections later, and I will publish myself. Regardless, the experience has been a rewarding one, and I will have received no less pride and no fewer moments of calm and clearness from my writing.

stop and think : it's not electricity

and the road is dark

i'll run toward the falling sun

Six ways to be a butterfly

Land gently and linger among the marigolds and asters, snapdragons and lavenders, daylilies and sunflowers. These buffet of flowers are yours to savor.

Strut. Twirl in eddies because you know everyone is watching.

Flit between sunbeams. Let light filter through your splendor.

Be careful where you rouse your wings. You are power, rippling exponentially.

A creator of hurricanes, you change the world.

Emerge backwards into your cocoon. Disassemble each scale in your wings and strip.

Be cozy. Stay cozy. Invent cozy if you want to know it intimately.

Love your furry plumpness. Caterpillar, you are child again.

Then fly away. Follow the tail end of summer with your brethren.

Let the wind guide you.

The sky is home.

Never be one thing. You are a child that flies. You are an adult that never leaves home. You are the essence of metamorphosis. You survive for sanctuary.

You die to live.

A single drop of rain,

clinging to the eye,

until its salt creases lips.

by the hand of life,