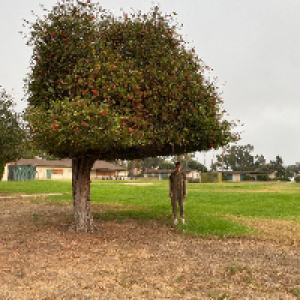 picture and picture of my bare pubescent bodies blur

and all my numbered ribs marked off

one when I was nineteen,

between my two hips

looked in the mirror and felt sick

so I took a picture

in it the curve is hard low heavy

not soft with piss

much too not enough curdles in me

white pus pours from the wounds I was born with

none of it dew

snow-ring indicates a death this winter

you came home with a ring on your keychain

just a shiny silver ring, Venus upside-down without her crucifix

it was wrapped around your finger like a solid black armband.

a rabbit’s foot against black ice and blizzards

where our bare feet forced the clutch to take,

where we ran ourselves off the road--

but that is not our custom.

lucky charm evoked when the disaster has passed

and now it’s hanging from your keychain

and I can’t help but wonder who it’s imitating

Cracked against the ground or the roof

Black walnuts, green on the outside

Spilling happily out of its skull

Four hours on the beautiful highway

It’s not Kentucky but that was a nice touch, anyway.

Every other billboard drew us into the lion’s den

Wasn’t there supposed to be a stone in front of that tomb?

All that for one crateful

Precious black walnuts, green on the outside

Boiling into acrid piss on the electric stovetop

In the incorruptible blue dutch oven

You and me were soldier-stanced, staring

Through the window at the hawaiian-printed front seat

A mercury key glared back at us

From behind the locked car door

Only they go one way in both directions

And they don’t cross themselves like mom says they should

We won’t pass that way again

Green on the outside

Sleeping under earth with miles of mire above Hand

A split sleeve spills out its arm next to a gloved hand.

That blinks beneath a hole shot through a dove’s hand

For what is a body outside its beloved skin?

A snarling rot--better to be a shoved hand

Seams pinch tight around the suggestion of Hand

I am not clay fed to life; I am a mud man

Plucked up whole and beating by God’s rough hand

Flight of the Starlings

I saw an omen grinning up at me

From the bottom of my cup

Buzzing against the skin of my eyes

And I held in gentle hands

A cupful of the grey sky

With one great wobbling drop of molten metal swirling inside

the sky got bigger above my head

all those flittering wings one square of static

that random drone humming in every direction was a comfort

Reminded me that my feet were still on the ground

When fishes swarmed through me

Evenings, I slithered past the porchlights,

crept into the quiet like a possum into a garbage truck.

I remember the van rumbling loudly to life

and me hushing it: not even the fog lights lit.

The night sky, slow and heavy as magma,

crouched over me when I sat in the driver’s seat,

pressing red bruises into the peel of a peach:

enticing red bruises on my cheeks.

Then the crush of bodies and salt and filth--

that tempest of sharp elbows and slavering tongues,

of skulls twisted into nautilus shells

I sank into their decay.

then gasped in hot air, muggy and sickening as the air inside my house.

And it was all of a sudden as if I had never left;

only to arrive at the same old unbreachable rift:

Her and I almost overlapping on one side

and that wide stretch of horizon on the other,

with everyone I knew standing on it.

Skin starts peeling at the treeline.

Sloughing off in great sheets

When the limbs overlap in lattices;

Keeping off the atmosphere.

You’ll never find a snakeskin in the garden,

But the forest is another matter entirely.

Soon, its rough flesh will begin to grate

And learn to wind between the bent-together bodies

Then, to the quick--

And when there is pulp

Clinging to the tree trunks,

You’ll find there is nothing in your pockets

That you thought you’d thrown away

Sunset at the Beach

I imagined then, those sharp filaments of sensation

should have come tingling back to my finger-tips

and punching through my chest.

But all that I felt

was the kick-back throwing my hat off

and the sun in my eyes

I turned around and walked home.

the sun was a red hole falling at my back.

glare glowing hot on my neck;

made my shadow bleed black

and stretch into a corridor, which beckoned me

to sink into it without a trace—

and it was as if I had struck four sharp knocks

against the door of misfortune.

Then his finger-bones were dug in and grabbing between my jaw.

Then I was knocking against the door, the plaster wall--him.

I was spinning out,

like a speeding tire on that wet country road;

with him circling wildly through my mirrors--

he, the telephone pole,

for a split second promising to give me what I was wanting.

I never could decide whether I was grateful that he was such a lousy shot.

I stood turned to the wall—white, dirty, an inch away from my hot skin. If I had dared give my back to that wall, the street would have whirred on around me—as in a tunnel of mirrors: nothing clear, nothing clear.

I leaned down and hid my hot face, sighed fast into the painted stucco. Passers by passing by, flaring loud and shorting out the scanners. Heart pounding at a friendly smile around the butt of a cigarette, a questioning thumbs up, and maybe that was a joint. I walked fast back to the main road.