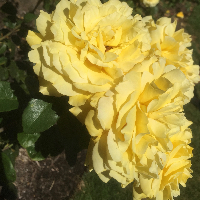 Follow
hannahbean
When you work in the library, you kinda go crazy being surrounded by words all day. So what do you do with that crazy? You write.
46 Posts • 235 Followers • 548 Following
Posts
Likes
Challenges
Books
Challenge
If feelings were substances, what would they be?

"Aren't ya a bit too young to be working tha bar, missy?"

The man was clearly schnockered out of his wits. The girl behind the counter sighed heavily, which did little to nothing to deter the man's hungry gaze.

"I'm older than you think," she finally replied.

"Oh really?" The inebriated ogre looked simply delighted at this information. He leaned in close and attempted to whisper conspiratorially, "How old is ya? I'd be hoping legal age. Eighteen, ain't it?"

He topped off his eloquent question with a half-assed wink, face drooping from years of what one could only assume to be exorbitant alcohol consumption. His breath reeked of Guinness.

Debating the consequences of cold-cocking him off the bar stool, the girl finally flashed him a wide, toothy grin and clapped her hands together. "How on earth did you guess? You must be some kind of psychic!"

She twirled around, leaving the giant to dwell on this newfound praise. Standing on her tiptoes she yanked a sea green bottle from the top shelf. The faded label spelled out 'Ego's Odium.' She prayed to whoever was out there that this man wasn't some sort of Spelling Bee champion. But by the looks of it, she doubted that he even passed the 2nd grade.

She turned around again to find the man's eyes had glazed over, staring at the place her ass once had been. His pupils dilated, he slowly returned to his original position, a lecherous grin stapled to his face.

"A good guesser such as yourself deserves a good reward," the girl purred, waving the bottle temptingly in the air, just beyond his reach.

The man's sight flipped in between the girl and the bottle, now a bit wary.

"Our latest import from overseas," came the reply, as the glass that had once yielding beer gave way to the misty jade of the bottle's contents.

"Looks like some'n outta a septic tank," he mumbled, but a self-assured swig from the bartender soothed his doubts: her face now showing nothing but the contempt it wore before.

"If you don't want this limited time offer, I'll take it back. Believe me," she leaned in far closer than comfort to make her point, "people can't get enough of this stuff."

His paper thin masculinity at stake, Goliath grabbed the whole bottle with his meaty claw and slammed it down like it was Coca-Cola.

Then his face contorted. He gasped for breath like a scorpion had stung his throat, leaned over the counter like he was about to heave out the couple keggers that had swirled throughout his bloodstream since high school. His face was as green as the bottle.

When the show was over, he shakily stood up and whispered something about calling his wife. He stumbled a few steps but made it to the door alright. The girl had gone back to polishing glasses.

"What, didcha try to off me?" the man finally spat out when his body was halfway out the entrance.

"I guess some people just can't hold their alcohol," was the retort. "I just gave you a taste of your own medicine. A bit of Self-Disgust never hurt anyone."

5
1
0
Challenge
In Inspiration of my new book : "Midnight Memos About Love by Nokulunga Mazibuko" What is the ONE truth/opinion/question/quote you have about Love??
Tag me @Bluebutterfly

Did the goddess of love ever cease her unruly matchmaking, put it towards learning about loving herself?

6
1
0
Challenge
Word Play Time! Try to write a piece with every word starting with consecutive letters of the alphabet, like this: ("A Beastly Challenge, Don't Ewe Find? ") Miss-spelling allowed, as long as it makes readable sense. I wonder if anyone can make it through the whole alphabet with a coherent story?

gospel of the dogmatist.

8
3
5
Challenge
We're all caught in their strings, our actions aren't all our own.

around my beating chest to ease it down to a

so it doesn't jump out of my throat

when you slide your hand into mine.

The fickle fingers of fate have

not ready to write things in stone,

fingernails bloody from bad habits and nail polish in negligence.

I sat down with Fate once, in a coffee shop in New Orleans. They ordered an oversized beignet, predictably getting powdered sugar all over the table. I watched as they dusted their hands off on a muted shirt worth more than my entire existence.

I asked them why we're just puppets in their game, and they just laughed, saying how misery loves company and the show must go on.

Then they got up to purchase another beignet.

The next time I caught up with Fate was in a record store in Toronto. They carelessly flipped through the vinyl, shaking their head at the fading prints. The CDs were noticeably ignored. I asked them why they were here, and they just smiled. I would be hard-pressed to find someone else, anyone else, who would wear sunglasses, indoors -

The final time I chatted with Fate was somewhere in the Bahamas. They were lounging on the beach, soaking up the sunlight if only to make sure no one else on the entire island had any left. I sat underneath an umbrella next to them, watching them listlessly flip pages in their novel. I couldn't make out the title, but I didn't really have the courage to ask. If I brought attention to myself, all of that spotlight might trickle over onto me.

Wrap that red string like a flag of surrender

tie it to the ground so you don't get carried away

Having your head in the clouds

The fastidious fingers of fate have

ready to write things in stone,

fingernails bloodied from another day of work.

6
2
2
Challenge
Write a haiku describes a place you love.

Let me count the ways

In the tinged champagne skin of

Lips, fresh on the trail.

Her body complemented the outfit.

Didn't realize she wasn't a mannequin until the flies came.

4
0
0
Challenge
Write a horror story in 100 words or less. Evoke fear in as few words as possible.

"Please make sure to put out your campfires before you go to bed!" the yellowed pamphlet reminded cheerfully, "The Forest does not like being in the light for too long."

10
0
2
Challenge
Write a haiku by reversing the rules as, 7/5/7 syllables instead of 5/7/5 syllables. Rhyme appreciated!