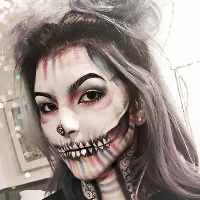 I want to know if you can taste it...

That guile riddled poison pouring from your lips.

Does it stain your tongue and corrode your teeth?

Or have you gained immunity

With every vile lie you've swallowed with pride?

You are whispering obscenities,

And splattering walls with your filth.

You are seeping poison from your pores,

And begging me to savor your skin.

You are spilling lies like truth in glass cups

And urging me to drink.

But I have no taste for it, my dear.

I have no taste for it.

Women are a mystery, they say.

Easy to read, as you please.

But when they close the book!

You won’t be able to read

But the title on its cover.

And what they also say?

I once read a book- or

I’m glad that you were born,

With no flaws instilled in you,

That only real humans do,

It must feel great to be so perfect,

And never be in the wrong,

For when real humans admit to their mistakes,

Sometimes they don’t feel so strong,

But now tell me why you’re angry,

Are you not proud of what you’ve done,

Is the narcissist inside you,

Wanting to escape away and run,

Oh no he’s back and tightly gripping,

His tiny hands around your soul,

And once again I’m the one to blame,

And the one out of control.

You had fingers slender as willow leaves

and diaphanous, lily-white skin. Your hair

languid current. Your lips were soaked,

bloated and pale, but for a streak of cranberry

field of hyacinth. Your eyes were numb

the opaque waters of the brook, beneath

the winding willow tree. You had a song

on your lips as you fell from its branches,

a wistful ode to the herb-of-grace,

the amber flower of rue.

A dream lover will come my way

A girl to hold and call my own

So I'll never be alone

We'll walk together side by side

And never have to pretend or hide

To never ever make her cry

Unless it's tears from joy

And all her sadness be destroyed

I don't care what people say

I know one day

A dream lover will come my way

The circus is in town.

The Greatest Showman is the newest musical film based on the formation of the famous Barnum and Bailey Circus, which as been on show for the last 146 years until its closure last year. The film stars Hugh Jackman as founder P.T. Barnum, Zac Efron as Barnum's business partner Philip Carlyle, Michelle Williams as Barnum's wife Charity, and Zendaya (MJ from Spider-Man: Homecoming) as one of the circus performers named Ann Wheeler.

I don't know much about the history behind the Barnum and Bailey Circus, so I can't really tell you if this film does an accurate portrayal of it. But that's not really the point of it, is it? The point is to show audiences a fun movie for all audiences to enjoy. And it worked.

So the first positive for the movie is that it is set up as a musical, which is really nice to see those making a comeback these days. The songs were done by the fellas who also did La La Land (which I have not seen yet but will one day). These songs have a great rhythem and melody and I really liked listening to them. The ones that stuck out most to me—as well as my favorites from the whole film—are The Greatest Show, This is Me, and Rewrite the Stars. I actually downloaded them to my playlist because I really enjoyed listening to those songs.

Additionally, the performances were done very well. Hugh Jackman truly shines in this film. I sometimes forget that he first started off in musicals before obtaining adamantium claws. He's an incredible singer. Zac Efron was also good too. And it was great to see him and Jackman do a duet together. It was almost like Jackman was telling Efron, "Hey High School Musical, this is how it's done."

But what really makes the film soar is how it humanized Barnum's performers and sideshow attractions. You see folks like the bearded lady, the tallest man, the fatest man, you get the picture. But the film shows that they are people too. Just because they're different doesn't mean they should be treated less.

Even Barnum himself was made very human. He portrayed as this perfect gentleman. No, there were moments were he got sleazy and he disregarded other people's wants and feelings just to get the spotlight. I mean what could you expect? This was the same guy that once said, "A sucker is born every minute."

Unfortunately where this film really falters is how predictable the film was. It really is the same story you heard a million times. Someone has a dream, they start to build that dream, it makes them famous, person starts being a dick, then there's controversy, and in the end the person realizes that everything he truly wanted was right in front of him. I don't think I'm spoiling anything because, like I said, you've heard this story a million times before.

Sure you can make an argument about every other film but at least there was something different that make them stand out. This one didn't offer much and I felt that it got dull in certain moments.

In the end, it may not be the greatest show but it's still a fun watch. If you want to see something fun, you'll get that here. Be sure to pick up some peanuts along the way and enjoy the show.

So that's my review of The Greatest Showman, yet another film that came out last month that I suddenly started to watch this month. Have you seen it? What were your thoughts? Please be kind, leave a like and comment, and check out more reviews here on Prose.

P.T. Barnum: "No one ever made a difference by being like everyone else."

This is How You Lost Me

My heart is frozen in this place. It is shattered but will not fall apart. It cannot be broken enough to melt and evaporate. Instead, I am suspended. I am a ballerina in a display case. I am old when there are many new things in your life. I am at the back of the cabinet. I am dusty, overshadowed by cobwebs and the other figures in your life.

I still love you. That's the problem. I stay more because of you than I do for me. It would hurt me to leave, but I know I could fly higher.

Feathers protrude from my spine and back. My skin tingles and goosebumps form. My hair stands on end and fades into something terrifying. The excruciating pain of their emergence prickles all my senses. I open my mouth to scream, but only a hollow echo sounds. It serves only to deepen a hunger within that you cannot fill until you can see me. This change, this metamorphosis, blossoming, it means death within.

I know you love me. You love me, so you put me in this case. But you've forgotten me. You've forgotten that though I never meant to be here, I chose to stay for so many reasons that have everything to do with you, and little to do with me.

My wings push away from my body. With every muscle in my core and shoulders, I hold them to my body. My fingers web yet closer together. The join to form my wingtips as my heart begins to swell. I lose my grip. My wings are spreading, the other figures in this case begin to stir.

I'm afraid. It's as though I don't want to be free. To be free means to allow my heart to break. Maybe even to break yours, if you cannot come with me. I've never been the person to walk away. I would do anything for you, but I'm losing my grip. I'm losing my sight. My vision is changing, and you are beginning to blur.

Porcelain shatters and the fine glass trembles. The flutter of these new wings has upset the balance of my ever-enduring self-control. The dischord cracks every other figure in this case. You reach inside. You glue me back together. Only I don't want to be whole anymore. My sprouting feathers prick your fingers. You draw back. I didn't mean to hurt you. If I could make them stop growing, I would. If I could. So you close the case.

Thunder strikes within me and I feel a pain in my hollow chest. It is the beating of a heart that so long has been captive to a love I never believed I deserved. Now, it births a life that is both amazing and terrifying. Help me.

You are afraid. The more you fear, the less you look my way. The glass will not hold for long. These feathers were meant to stir in the wind, these wings to spread against the colors of the sky. I want to take you with me, but you cannot see me anymore. You see the feathers and the distance of the horizon. You see all the ways I can be taken away. But to you, it isn't real.

This is how you lost me. I didn't want to leave...and though I'm in this case, a part of me has already flown away.

You wanted a sacrifice

Take all of my advice

You wanted a sacrifice till the end

You wanted a sacrifice

I will see you in the end

A lost woman’s pledge to the flower

Skull sitting before a mirror, shadow half way

The title matches the definition - but

She is also within the realm of vanity

cada mortal in the universe.