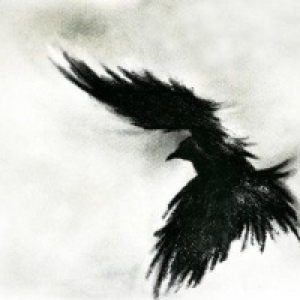 I’m suffocating on air that

was supposed to free me,

While that hand that should have

saved me pushes me back down.

Down, down, under the water.

Drowning in a place where there are no victors,

Dying in a world whose greatest achievements

are the corpses who litter the pavement

Caught within the storm;

A maelstrom of fire and ash

yet merely known as ‘home’.

Wrapped in sure arms

that hold a mischievous grin,

Protector and herder of the lost,

God of something so pure as Chaos.

If lines in the sand must be drawn,

I stand beside who is both Ice and Fire,

Darkness and Light, Life and Death.

I will turn my back upon those

who hold my blood,

For the people I have chosen will always

be stronger than those forced upon.

“Blood is thicker than water”, they say,

Which is true, and it is also so

much more satisfying to spill.

I hold no ill will to you, you know

who you are; O’ Harbingers of Battle,

But if you call to rally arms,

I yet remain in the ranks of the Shadows.

I have always believed The End to be

Yet you have called to me,

Told me to abandon who stands at my side

when you yet refused.

My loyalty is stained in my own blood,

I will not hesitate to stain it in yours as well.

Fate be with you, O’ Bringers of Pain,

For Ragnarök is a cycle; a wheel

to spin again and again.

But eventually a spoke breaks

and the wheel crumbles;

So be careful where you stand,

For my line is drawn and my side is chosen

And I will not leave my family,

4
2
0
Challenge
Challenge of the Week CC
Schizophrenic. Madness or genius, your choice. Fiction or non-fiction, poetry or Prose.

I was seven when I first heard the voices;

Seven and excited, seven and young.

I called them my friends,

Gave name to the phantoms,

Seven and no longer alone

with my very own shadows and a

gift to see the dead.

I was eight when I realized

they could not be seen,

Not by anyone but me.

I was eight when a shadow gave me his smile

and told me to not be afraid.

I was eight when a shadow showed me his scars

and told me his fears, how he would

protect me when I could not protect myself.

I was eleven when I realized

that I was not 'special';

That I had no gifts.

I was eleven when I realized my phantoms

did not exist, not truly.

I was eleven when I realized I was mad

and my shadows were no more than cracked

mirrors, haunting and revealing my soul.

I was fifteen, fifteen and broken,

and the shadows I had called 'friends'

left bodies in their wake.

I was fifteen when I saw a young man hung

and a woman sliced open;

My shadow phantoms with red hands

I was sixteen when officially diagnosed,

All in one word: 'schizophrenia'.

It should have been calming,

To have a name to match to the shadows,

A reasoning behind the blood,

The answer to the longing to death.

It should have been calming

but by that time, I too saw red

and my hands were just as warm

I am seventeen, seventeen and scrambling

for reasons on why and attempts to stay sane.

I am seventeen and drugged, but my

shadows remain and they still yet whisper.

I am seventeen and I wish I could tell you

this is a work of fiction,

But even now my shadows watch,

and my shadows smile.

1
0
0
Challenge
What are you most afraid of?

That when I die, I will not be dead.

That there will be some form of afterlife.

What soothes me most is the thought of nothing, the idea that death comes and that’s it.

That everything stops, the light leaves, a body becomes nothing more than an object.

My fear is most people’s hope, and vice versa.

How unorthodox of me, hm?

I want to die and be dead; no thoughts, no feelings, no heaven nor hell— I crave the nothing and fear the possibility of continuity.

8
3
3
Challenge
Challenge of the Month XVI: July
World Stage. You have the entire world's attention and can say no more than 1,500 words. What say you? Fiction or non-fiction, poetry or Prose. $100 purse to our favorite entry. Outstanding entries will be shared with our publishing partners.

I wanted to have something witty,

Something profound to say.

But at the end of the day,

All I feel is disappointment and depression.

I wanted to have a call to arms,

Something to inspire and educate people.

But if there's one thing I've learned from living?

We call ourselves the smartest species

and yet here we are,

In a race to see who can kill ourselves the fastest.

2
2
1
Challenge
Challenge of the Month XIV: May
Spirit World. Some call them ghosts, or angels, or guides. The Japanese call it Shinto. Cultures around the world call it Shamanism. Many call them the schizophrenic ravings of lunacy. Whatever you call it, or them, write about the unseen world of spirits. Fiction or non-fiction, poetry or Prose. $100 purse to our favorite entry. Outstanding entries will be shared with our publishing partners.

The Consorts of Lies

There are those who exist within shadow,

Wearing the skins of wraiths while dealing in whispered oaths.

They trade screams for silence, pain for emptiness,

They take the light and leave only dark.

It is them who hold countless false promises,

It makes no difference who comes to them;

Continuously, they consume trembling guilt as if it were brandy.

It is them, these creators of faulty bargains,

That you come to with your sacred words.

You will stop at nothing to reunite with your lost.

The rain does not deter you,

Not even as its acid hooks into your skin.

The red throats surrounding do not scare you off,

Not even as you wade through their remains.

No, you have come to make a deal,

Foolish of you, really.

For you have entered the realm of shadows,

You are dealing with the consorts of lies;

And you will not leave alive.

I stand alone on the edge of all,

Beneath the sea and before the fall,

Silenced to hear the sirens call--

Abandoned again in the shadows drawl.

Listen in sorrow to the sparrow’s song,

The grief of a mother always feel so wrong.

I ask again; what is the point of it all?

Dance with me upon the chasm,

Teetering on the edge with each spasm;

Lie in askance for my mercy upon you

But I ask, in the end, what else is there to do?

I’ve cut the ties and burned the bridges,

I’ve spilled the ink and the sung the phrases,

I’ve paid the tolls and broke the minds;

And here I am, with the stage set and the stars aligned,

Ready to take the fall.

1
0
0
Challenge
Challenge of the Month XI: December
The Unknown. Perhaps it's our purpose, or an obscure branch of theoretical physics. Maybe it's the existence of a supreme being, or the origin of life. Or maybe it's something more personal. Write about something unknown. Fiction or non-fiction, poetry or Prose. $100 purse to our favorite entry. Outstanding entries will be shared with our publishing partners.

Embarking into the Unknown

Faces of those who are lost stare ahead, each with their own tale and own terrors;

Stories of the past, present, and future; held within tears on silk cheeks.

Will asylum be given as promised? Or are these lives another batch to be caged?

Scores of people stand here, taking the hands of their neighbours while trying to ignore the blood aside.

A mother, a child, a veteran, a victim, a politician, a felon, a worker—

Does any of that matter?

Dow we all not plead equality and second chances, even for the damned?

Are we not all human, regardless of origin, race, or experiences?

Do we all not bleed when shot, cry when lost, die when hung?

See this woman here? Well into her age with two children trailing close behind?

She had lived in abuse, been raped and beat; she is disallowed to even speak.

She clings to her religion, as it is her only salvation,

Yet you judge her for the hijab she wears to protect her own self?

You judge the ceremonial robes she must wear, is beat if she does not?

Or, do you see this child? Painfully skinny and short from malnutrition?

He works, everyday, until he drops dead of exhaustion and is abandoned in the factory.

Why? It’s to send money back home to his family, all dying of cholera.

His sister, only eight, is already dead, but he knows not.

His family is too weak to make the journey to freedom, or they are simply too scared of succeeding— to finally make it to the border to be killed at the gates?

So many people making the journey to the unknown;

Wondering if they will make it to a safe haven or die along the way,

Wondering if they actually manage, will they be sent back to die?

Will they be kept in cages like animals, separated from those they love?

But still, they come, embarking into the unknown that has been lined with red;

Some want a better life, for some it is either this or death, for some there is no choice.

And for most? The unknown future is better than the bloodied past.

4
2
0
Challenge
Challenge of the Week CXLI
What do you Desire? Fiction or non-fiction, poetry or Prose.

Lost in a world of strife and squalor

and yet you dare to ask what I desire?

Here we are, trapped somewhere between pity and apathy—

How stark a contrast to have.

What do I long for? I’m not so sure I know anymore.

Something grand, yes; some fabricated belief that will never come.

I often wish I were dead;

But what’s the fun in dying