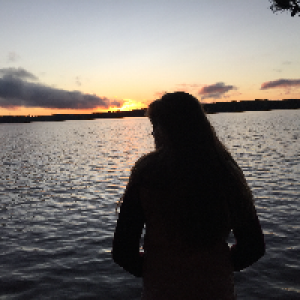 When Is a Wolf Not a Wolf

A wolf is only a wolf

He does not wear sheep’s leather clothing

Nor do tattoos snake his arms

Nor do melodies drip from his fangs

A wolf is only a wolf

I do not see the emerald I used to seek

Now it is only a wolf

I wonder not of his rampages

His drunken wars waged in silence

Against the forest offering him shelter

Til the moon returns to keep him warm

She can warm him all she likes

Inhaling the decay of the story

Before its been told

My heart gives no lurch

Greeting me with sweet nonchalance

Instead of wolfish appetite

Though I suppose its appetite is likely wolfish

I would have looked

And I would have seen You.

Now it is only a wolf

eyelashes forgetting the burn of mascara

stacks and piles and mountains of hardcovered dreams

half unwoven braid flirting with daisies

pulse speeding only for motorboat roar, for steel guitar anthem

sand chipping away at fuschia nails

and other forms of shedding yesterday

"I freaking knew it."

My fork was now on the table, instead of held gingerly in my hand, as it was only a minute ago. Heat flashed upwards, flushing my neck and face, eliminating any possibility of playing it cool.

"Unbelievable. For weeks, all you've been saying is how you're better off without him and you're so jazzed he's finally gone. But all I had to do was say his name, and you drop your freaking fork? Are you kidding me?"

It was pointless to say that the uttering of his name and the dropping of my fork were two separate, unrelated events, but she knew me too well for that kind of bull.

"It's not a big deal." Even my muttering was unconvincing.

She smirked. "Whatever, hon. You do you. But you might want to let your mental state catch up with all this "better off" crap you keep spouting. You do know that C—"

"Please don't say it again." I whispered, the plead in my tone coming through a little too strongly for my liking.

She barked a hollow laugh. "Fine. He-who-shall-not-be-named is out there living his life, probably stringing along another half dozen girls, without a care in the world. And you owe it to yourself to get to the point where you can hear his name and manage to hold onto your eating utensils."

She managed a nod.

“What, you didn’t trust him to leave you alone?”

She laughed, fear of misspeaking forgotten. “No, I didn’t trust me. Because for every night like this, when I’m furious, when I’m sure I want him gone, want this done, I know there will be ten times as many nights that I would sell my soul to be back with him. And I didn’t trust myself to be able to just walk away from my phone when those nights came.”

“But what if he tries to apologize? What if you miss it because of twenty seconds of blinding rage?”

Her voice reduced itself to a raspy whisper. “Don’t you get it? I have to miss it. I can’t keep living like this. I had to take advantage of those twenty seconds of blinding rage because they might have just saved my heart. This might be my only chance to move on. And we both know it needs to be without him.”

Her phone gave a quick glow. Her eyes darted to the screen, before flashing away, cheeks flushed. It had only been a day since she blocked him. And she knew it would be a long time before her phone would buzz and he would not be her first thought.

And with the blare of an alarm,

the throwing of auburn locks into a half-hearted french braid,

the wiping away of yesterday's mascara tears,

and the downing of a third cup of coffee,

she took her life back into her hands and moved forward.

Her grip on the phone tightened, like the way her mother’s arms would tighten around her if there weren’t thousands of miles separating them. She couldn’t breathe, but didn’t trust that she’d be able to take a gulp of air without a sob catching in her throat.

“He should be using caring words and gentle hands, there shouldn’t be fear or guessing games.”

There was a pushing on her chest, the weight of spending months under his control finally closing in. She shook her head violently, struggling to process what her mother was inevitably about to say.

"And when you feel that little flutter in your stomach... because I know you will feel it again someday, make sure you know the difference between butterflies and ravens this time around."

She laughed. "Ravens? Why ravens?"

"Ravens mean danger. Remember that first night when you came home all fluttery and giddy? What you felt for him? Those weren't butterflies. Those were ravens. You owe it to yourself to never confuse the two again."

Every stolen moment she had spent with him had been laced with the edge of danger.

The quiet thrill of getting away with something.

She had been drunk on the intoxicating combintation of him and danger. Or maybe they were one and the same.

But in the days since she walked away from him, she felt a renewed sense of that same feeling.

That leaving him was an escape of sorts, was getting away with something.

She would never be able to articulate aloud the source of such a sweet bear hug of a feeling.

But, all the same, she knew what it was.

It was her subconscious quietly acknowledging the relief that came from the notion of a life without him.

And he even had the audacity to say it with a smirk, like this is what he wanted, he wanted to see her hurt and fume. Green eyes raked over her with that same intensity that always left her feeling too exposed.

Of course she was mad. How could she not be? While she normally found a sort of reckless thrill within his charming edge, he had officially gone too far. She couldn’t sit back and let him say something so inherently vulgar, launch such an intentional, immistakeable, direct hit. She couldn’t give even the slightest indication that she was amused or anything less than furious. Because if she didn’t draw the line somewhere, there was no telling how far he would push.

But he wanted to see her mad. Which meant she couldn’t let on how upset she was.

Something gently buzzed in the back of her mind, reminding her of his tendency to tease and play. That tiny, damned part of her that still wanted to see the good in him whispered that this was likely only a joke he had taken too far.

To her credit, her face betrayed none of the storm brewing within her.

“Well, if that’s actually what you think, then that’s a pretty good indication about kind of guy you actually are.”

This was the test. Give him an opportunity to take it back. Despite her stubborn pride, she so desperately wanted him to apologize, say he was only joking. But then again, he was the only person she had met with as much stubborness nested within as she had.

His expression hardened, smirk gone. Not the answer he had wanted.

There it was. His retreat. Which gave her the answer. Because if he wanted to keep playing games, she knew she owed it to her tattered heart to cut her losses and bolt.

She held his gaze a second longer than she should have, before nodding, turning on her heel, and walking away. Step by agonizing step.

She didn’t have to turn around to know that he was not following her.

Every time you disappoint me, I think I can hear God whisper, "See? This is what I was trying to keep you from."