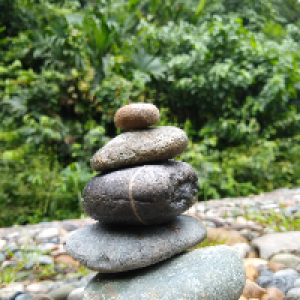 Follow
querencia
a place from which one's strength is drawn, where one feels at home; the place where you are your most authentic self
230 Posts • 241 Followers • 60 Following
Posts
Likes
Challenges
Books

The man at the microphone is telling us about his mystery girl, he calls it a love poem but it reads like a grocery list,

-if they don't have a brunette at the store a blonde will do,

he knows she's not his forever, but at least she still fucks all the broken pieces of him back together,

and he thinks that's good enough,

and I think that's the saddest thing I've ever heard,

to the time when nick from elementary school told me love was just one of those made-up things,

But I've seen a giraffe so maybe he just meant it's hard to find,

maybe he meant it doesn't live here, in a place like this.

Maybe he meant that when you are so focused on finding something perfect you forget to find something real, and you can't fuck away your fucked-up feelings, and a girl is not a sex toy,

but one time nick from elementary school lit a cookie on fire in the school microwave, so maybe he didn't mean that at all,

maybe I am putting words in his mouth,

the way the man at the microphone is speaking for his girl,

telling us the noise she makes when he touches her,

and I think he means it to feel vulnerable,

because I have never felt so alone,

but I hope his girl knows that she does have long legs. And nice tits.

And deserves someone who can write a halfway-decent love poem.

hang streamers from my

ribs and call it a party,

9
5
5
Challenge
Rain
I love the rain. I love being inside when it rains, it relaxes me. Write a story where it always seems to be raining - or a lot.

so in the desert we make do,

planting tears like prose across the back of each hand

where they ripple between shaking breaths.

She is ugly when she cries,

but nothing grows from nothing,

and to water dreams with grief

is better than watering them with nothing at all.

in the belly of the beast breathing doesn't come easy,

there is air, here, but not enough,

and the knowledge that one day it will run out

makes a part of you wish it was never there in the first place,

because at least asphyxiation is an ugly word,

the kind that makes your tongue cut itself on each syllable,

not slur into silence

But as long as there is air here

it will be yours,

in an empty room somewhere foreign.

I will title the chapter 'the Cold War,' and it will be funny,

because time has a way of doing that.

The words will come easily, the way they do in history textbooks,

lifeless things lined up neatly on the page.

And they will not hurt.

Their author will have forgotten the time when they were ammunition,

where family photos hung on the walls of the battlefield like some sort of poorly-written irony.

She will have forgotten the fear of words pounding like shrapnel against too-thin doors,

and the deeper fear when it all was quiet.

She will leave out the part about how her lungs ached from holding her breath,

waiting for the bomb to drop, and knowing there is nothing in this world she could do about it,

a part of her wishing they would go ahead and press that red button,

because when your world is reduced to dust,

at least there is nothing left to wait for.

the winter's sky a steel-grey slate.

this is eternity, identical computer tabs,

The tears snap against the linoleum,

sputtering chains of letters and numbers and self-worth

across the sterile floor.

when the scars are sweet

I am looking at the scars on the back of my hands,

a crescent across one knuckle,

The one at my fingertip,

from learning how to cut onions,

laughing around the tears.

When I tell her I know her like the back of my hand,

I am referring to this place,

all splinters and sweetness,

and a thousand other moments that have faded with time.

When I tell her I know her

I wonder if she realizes

I don't know her at all.

Tomorrow I will wake and find that the tabloid magazines in the grocery store checkout aisle have lied.

But the eyes looking back at mine in the mirror are the same.

Maybe it's not about this night, though, but the three-hundred-and-sixty-five others.

One of those "it's about the journey, not the destination," kinda things.

Congratulations, space rock. You've made your way around our star yet again.

I'd like to think that the girl at this checkpoint in space last year was different.

That she's since learned the difference between being alone and being lonely,

how to take up space, and hold her own, and cry a little.

That she's not afraid to say yes to the things that scare her in a good way,

and no to the people who aren't worth it.

I think she's still a little lost, but maybe she's made her peace with that.

Maybe it's enough to live for the little things,

and love a little recklessly,

and grin for no reason at all

as this rock sets out on another trip around our star.

Winter will come and it will ache in the right ways, like so many memories blurred by time.

Somewhere a child lies face up in the snow, their breath hovering above parted lips before falling,

freezing like teardrops at the corners of closed eyes.

This is a place of melting, tree branches clawing towards a deep blue sky, casting boughs of wet snow aside like chains,

pattering a frantic staccato against the stones below.

You cannot grow up in a place like this without letting it inside you,

the way snowmelt curls against mountains, nestling it’s way into the cracks,

This place will change you,

as the silt of your soul tumbles towards the sea below,

you will be reminded that it is in change that the freedom to this place is found.

There is freedom here,

in the way my breath escapes these lungs,

the way the words escape my throat, messy and incoherent like so many pebbles clattering down a mountainside,

but I have spent too much of this life afraid of heights,

and there is something exhilarating about falling

4
1
5
Challenge
Use A Metaphor To Broach An Uncomfortable Topic.
Stretch it to the limits.

When the china shop is built around the bull

you are forced to make way,

push porcelain against walls, bend slivers of shelves around her,

and focus on your own breath,

because when the teacups come clattering down

it will be due to your own carelessness.

There is a sweetness in loving the thing that is tearing you apart,

when silence is ground like ceramic under pounding hooves,

pretty words lined up like so many dinner plates,

made more precious by the knowledge that one day these, too, will fall.