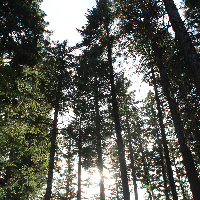 Follow
woodswalk
Take a drink in your hand, a road at your feet, and a pack full of paper.
7 Posts • 15 Followers • 3 Following
Posts
Likes
Challenges
Books

Comings and Goings
Chapter 1 of 4

The hot, dry air has gotten restless. It is blowing about the room,

looking for your sundress.

The smell of sage wafts onto the tabletop,

I am rooted in the shade of that summer willow,

its river-touched branches dancing and woven with my heart—

Don't you notice how you tug on it,

playing as they do in Pieria?

What lovely phantoms these memories are,

echoing the unending sweetness I saw in your eyes.

Comings and Goings
Chapter 4 of 4

I cannot help but think of green and blue.

Water lapping against sea-rocks, sure and many colored amidst the tide.

Pines' emerald fragrance filling my lungs with their sparkling damp.

The sky, reaching beyond the horizon to sow the void with morning glories.

Hues I feel course through my blood, echo within my beating heart, taste upon my bated breath—

Your love is this hue.

Comings and Goings
Chapter 2 of 4

Twisting vines choke me, ripe with grief and fear-trembling.

Wine bitter-sweet spills from my heart and my soul cannot abstain.

Every drop of pain dappled in summer light is soaked into the soft temple floor,

Seeking the lattice-cracks at the root of my being;

I am ripe with what cannot be harvested.

I am drowned, baptized in libation, praying grace is near.

I do not seek release from this pain but within this pain.

This cavernous, echoing emptiness and the joyous melody that dances my heart

Spring both from the fountainhead of love.

Where is, then, the delivering illumination inside my sorrow?

O gods!一 Unveil to me the starlight on this wine-dark sea,

So my tears may bear up to them all the love I cannot give.

Comings and Goings
Chapter 3 of 4

How the sky changes hue,

I once asked the wildflowers;

They said a zephyr wings to mantle

There, each day, they blossom

Each shimmer a new shade

Between sunset and sunrise.

At dusk, their petals withdraw;

How these wildflowers worship

Is with no heaven, nor any hell;

And violets are NOT

It's there in the name.

are never going to learn anything,

are you? Life is not frilly words.

A sunset is just the

earth spinning, love is a

and then we die, and what's

in between is full of

an indentation here and there,

So, it’s the end of the world.

I'm usually a pretty calm, collected person (except when it comes to memes and other modern modes of artistry) but today has been very testing.

Today was the beginning of what I'm assuming is the Zombie Apocalypse, and I saw Marvin die wearing his The Walking Dead t-shirt while walking back from the coffee shop. Which makes sense. The undead are known to be fond of irony (especially skeletons, zombies coming in a close second) so they're probably intentionally targeting the people wearing stuff like that.

Anyway, I should have known this was coming. My friend Juda is a level-fifteen vegan, and being such, has the ability to receive premonitions through dreams when he sleeps with a leaf of Blessed Kale under his pillow. He told me this would happen when I went to pick up the artisan, cherry wood ouija board I asked him to make me.

So, right now, I'm boarded up in my apartment baking cinnamon rolls because the ouija board told me that zombies can't stand the smell of them. And after that it said something in a different language.

Just that phrase, over and over. Okay I'm gonna look this up...Okay so this app says it's saying "I hunger, mortal, for the taste of sinful flesh," repeatedly in Latin. Well that's nice. And kind of kinky... I think I'm gonna just put the board away.

Well the cinnamon rolls are almost done, and I think it's working. Not a single zombie has come down my hallway, even though I can hear gunfire coming from the room above me and the sound of screaming from the one below. I guess I don't have to pay her hospital bill anymore though, which is nice. Must suck to be on crutches during the Apocalypse. Sorry about breaking your leg, Taryn.

This whole apocalypse thing hasn't been too bad for me actually. Marvin From the Corporate is dead, I don't have to go to work tomorrow, and I just saved a couple hundred bucks. In fact, there's just one thing that bothers me, and that's the fact that the world is ending via zombies. Like, really Universe? You decide the world is gonna end and you choose the most cliche way to make it happen. BORIIIING.  Why not aliens with giant cats that hunt humans like mice, or an army of sentient food? You could literally have chosen anything.

And this is what we get.

Well, I'm tired so I'm going to put a butt-ton of cinnamon on these rolls, leave 'em on a hotplate, set them by the door, and go to bed.

Universe, there better be something better than zombies trying to kill me tomorrow, or I'll kill myself just to spite you.

Explorer on a Chair

Two worlds with one seam

each a reflection, each a

frontier. I am my

own Cão, a navigator.

I step into air, Beyond.