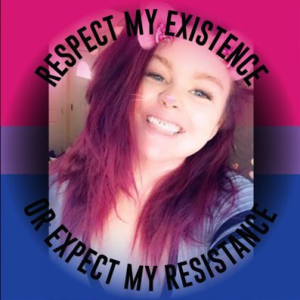 The man’s mind was racing a thousand miles a minute. He’d been waiting so long and the night was finally here, yet he found himself a bundle of nerves with a dry mouth and shaky hands. Good thing he just needed to obey tonight- no way could he do anything more than follow right now. Not with what they were about to do. Not with her. Not with how she looked at him, full of fire and passion, but also love and tenderness.

She stood there, eyes locked on his, unblinking, as she slowly stroked the monster cock she’d strapped between her legs. His breaths came shorter, faster, more unevenly as he tried to tear his gaze away from her silent challenge… and failed. He was frozen in place, save for his tongue darting to surreptitiously lick his lips. She watched him impassively, her face a blank mask devoid of all emotion, the intensity and weight of her gaze causing him to fidget and shift on the spot.

Finally, she decides to stop toying with him.

A slow smirk spreads across her face as she cocks her head and studies him, his face a hazy mask of lust and need, his body quivering in anticipation and his muscles vibrating from the effort he must be expending to keep himself in place. She slowly walks towards him, observing every twitch, every pulse, every slight change in body language as she approaches.

Prolonging his torture, she steps behind him and leans over his shoulder, her long curls falling across his skin leaving sparks of electricity and the heady, intoxicating scent of blackberry and spice in its wake. Her left hand comes up to caress his neck, teasing him with razor sharp claws before slowly wrapping her fingers around his throat, applying only the slightest hint of pressure, just enough to cause him to quietly whimper with need. Her low, sultry chuckle sounds in his ear as she whispers “you’re rather needy tonight, my little pet”.

His thighs involuntarily clench tighter together, his breath nothing more than a gasp as she nibbles along his earlobe, her soft lips following quickly begins to kiss away the sting of her teeth. Her hands begin to roam his body, feather light touches eliciting a chorus of moans, whimpers, groans, and pleading noises as she tweaks his nipples, teases her nails along his ribs, digs gently into his back and chest.

Giving up on maintaining his composure, he leans back against her, offering himself up completely to the sensual torture of her expert ministrations. She bites harder on his neck, causing him to groan in pleasure as he tilts his head back to offer more of his throat to her, an instinctual signal of his submission. “Do you trust me?” she murmurs into his neck. He turns his head to intercept her mouth and steal a kiss, sighing contentedly into her mouth as he tells her “yes, more than anything”. Smirking, she raises an eyebrow and chuckles as she pulls him to his feet and leads him over to the bed. “Good” is all the response he gets.

My love, let me to submit to you

Relinquish all control of my body and mind

To the man I trust with my everything

Give you free reign, dominion over my soul

Bow my head and worship you as my god

I want to bare my throat, my flesh

Feel the bite of your teeth

The urgent grip of your grasping fingers claiming what’s yours

Needing, pressing into my skin

I need to give in completely

To trust, to free my mind

My kind ruler, my loving warrior, my fierce protector

Mark your territory, make me yours

Bring me to my knees with pleasure

Oh my darling, won’t you tame me?

Take my wild, break my feral, bend my will

Be everything I need and more

And show me how a warrior claims his prize

If this past decade of life

Has taught me anything

It’s that having a good heart

People will still use you

Will still abuse you

People will still put their everything

As they watch you shatter

But it’s also taught me

That I don’t care

You can try to break me

Try to bring me down

But any success you have

Will only be temporary

My heart is still good

No matter what anyone does to me

You may knock me down

But don’t ever doubt that I

Will get back up stronger and

My heart is resilient

Than the burden of hate

Even on the cloudiest of days

I am the phoenix

You may see me burn to ashes

In a fiery blaze

To see me rise again

More powerful than ever

I walked thru hell with bare feet

Came out the other side

The demon within me awakened

Ready to save me at any cost

Protection from the pain of this world

I walked thru hell all alone

Tired and frightened and cold

I was born of barbed wire and lace

Of searing heat of the fire

And the salt of the ocean

I was born of a love that will never know deaths

Bare your gentle throat to

Left breathless by my bite

Pink with the imprint of

My claim to you

The color of a fish's scales in the sunlight; glistening, shining, iridiscent... Radiant. Cool steely grey exploding with purples and blues when warm rays of sun smile down upon it.

5
1
0
Challenge
Anger
Describe vividly how you feel the emotion 'Anger'. Does it spread like wildfire in your body or does it start with the slow increase of your heartbeat. Does it urge you to create chaos or do you push your demon down back into its cage. I'd like to read all responses :)

Everything is fluid, even anger.

Often it’s a slow burning wildfire, gradually gaining in size and strength until everything in it’s path is destroyed. It can be contained if caught early but when it explodes... I become the rage fueled sparks flying in a whirlwind around my body, incinerating everyone and everything I touch, burning people alive and turning cities to crumbling ash, a wave of destruction marking my path. I feel it in my chest, a deep burning that rapidly spirals and changes my body from flesh to fire, spreading thru my limbs until my very core is shaking with barely contained violence. This anger strikes fear in the hearts of many, but from ashes you can rebuild.

But some days... Oh, some days the anger is cold. Calculated. Seething. More a silent riptide than all consuming flame. Imperceptible at first, it quickly makes itself know. My eyes go dark, soulless, unflinching. I become a shark, a viper, the carefully controlled demon inside of me raring to be set free, ready to wreak havoc and rain hell down upon my enemies. This is the wrath you should fear. The moment I go quiet, when my body stills and my breathing calms, that is the moment you finally understand the depth of what true terror feels like. When a smile creeps across my mouth and a laugh filled with the devil erupts from between my lips, the end is near. The anger fills me, consumes me, awakens my inner predator. There is no coming back from the ruins I leave in my wake when this beast gets the scent of blood.

There is only ruin.

Am I just a warm body

To stave off the loneliness

That haunts you in the night?

And then I rub your sleeping back

You roll on your back and

I curl my body into yours

My chest pressing against yours

Face buried in your neck

You wrap your arm around my shoulder

Your fingers tense against my arm

Your other hand reaching

I draw the knife across my skin

The caress of an old lover not seen in years

The blade gaining a confidence of its own

No longer under my control, an entity of its own

Dripping down my body to the floor

Staining the tile red with my agony

Emptying me of this overwhelming emotion

As the blade sings across my skin

A mournfully joyous tune I haven’t heard in a while

The melody as familiar to me, as comforting

As the beat of my own heart

Every moment of my blissfully excruciating escape

Raspy vocal cords scream a prayer that it never ends

Emotions pour out of my body

In a sea of red

Emptying me til I’m hollow again

Until finally the numbness spreads

Envelops my body in a comfortable embrace

As I slip to the bathroom floor

Some days the words come easy

I can perfectly express myself

By the words that flow between my lips

And then I’m lost

A jumbled heap of messy words

Stumbling over each other in their desperate rush to escape

To slip past my clenched teeth and baited breath

Trying unsuccessfully to hold them at bay

Until they become organized, coherent, together

No matter the delivery

The intention remains the same

I hate you, you hurt me, please leave