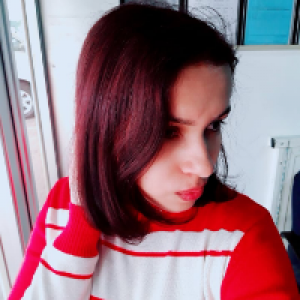 Follow
Sweedle
"she is a combination of savage & sensitivity " #INFJ |#Sister |#Author |#Philomath|#Booklover
44 Posts • 92 Followers • 36 Following
Posts
Likes
Challenges
Books
Challenge
Writing Competition
The story must be original. No limits on the number of characters for maximising creativity. The winner is determined by the authenticity of the story. The prize is an Amazon Coupon Code. Please put your email address after writing.

"Don't talk to strangers " was what my mom used to tell me. She said it today too but it fell on my deaf ears. And now I can feel those words mocking at me, bit by bit.

I should have really listened to mom.

I lied to her by saying that I'm going out to play. In fact, I was heading to the old dilapidated building a few blocks away, just to have a look at it ...... alone. It was foolish.Maybe dangerous too ...I know but the rebel inside of me compelled me not to think so much about it. The darkness seemed so tempting yet so mysterious.

It was fun until my eyes fell on him.

And there he stood. The bad man everyone talked about. With his coat creased, a fat cigar between his lips and those hungry beady eyes, he resembled the big bad wolf and me, the stupid red riding hood.

My mind screamed at me to run but I just stood there watching him walk towards me in slow calculated steps. He held out his hand and offered me some candy. I took it but didn't eat it yet. Uttering some sugary words he lured me inside, holding my hand in a tight grasp. And I don't know what happened next but the world went black. Or maybe because I was knocked out cold.

Next morning I awoke in in the attic, tied to an old stringy bed with chains. Rust particles had gathered on the bed poles, the chains, and even the door hinges. The windows seemed to be nailed shut and a weird musky odor hung in the air. I could hear him climbing the stairs,approaching closer to where I was sitting. His heavy boots scuffed the hard wooden floor in loud thumps that made my heart beat faster by every passing minute. I don't know if I was ever this scared before.  He stood at the doorway,staring at me as if I'm his new found toy.  His hands held a jug and a steel tumbler.

"Are you thirsty?" He asked gruffly. I chose to keep quiet. This seemed to annoy him. He trudged even closer and I could see him looking at me with disgust.

I shook my head.

He placed he jug and tumbler on the small table close to the bed and sat next to me.

" Don't worry. I'll take care of you, you will make new friends. ......at the graveyard." He smirked and my heart dropped in my throat. I started to cry. He raised his hand to touch my cheek but I pushed it away. His smiled turned into an ugly sneer and he raised it again, this time higher to hit my face. I closed my eyes waiting for that stinging burn of that slap. But i felt nothing. Loud footsteps rambled along the staircase and in no time we were facing a group of angry cops, who were pointing guns at him and ordering him to surrender. He began to laugh at them and held my hand in an icy grip. No sooner one of the cops pulled the trigger and shot him down.

Bang bang. He fell on the ground.

Soon the cops pulled away from his body and began to talk to me but I still chose to keep quiet. I kept staring at the jug. The chief carried it in his hands and looked at me.

" Wake up! " And he splashed icy cold water on my face.I woke up and found myself staring at my mom's face in confusion. I looked around and realised I was in my own bed.

I heaved a sigh of relief and wiped the sweat over my brow. No sooner did I place my feet on the floor , I regretted it . The cold jug touched my feet and I picked it up , grimacing at the blood stains on it. I looked at the clock and decided to clean it up later. So I bend down and placed it under my bed. That's when I saw it. The severed head of my captor , stinking with its own blood and looking at me with bulging eyes , a sign of astonishment. The police never came to my rescue so I had to be my own hero. Though I did wish the axe was a bit lighter to hold . I smirk at it and get ready to go to school. Tonight I'm meeting new friends at the graveyard.

I love all the shades of purple,

Because it's so majestic yet so

Mysterious at the same time.

You wouldn't miss getting

4
0
0
Challenge
Pick a word or phrase with fifteen letters, and use it to write a 15-word acrostic poem. (one word per line)
It can be about anything, but it'll be more impressive if you can get the words to read like a full sentence. Feel-free-to-cheat-with-hyphens.

Battle with inner self

We often try to extricate ourselves from the parasite

of evilness inside us

Gnawing at our consciousness

that we have committed

So much so that we grit

our teeth in pain and

We fail to notice that

So if you're fighting with

Keep calm and bear it in your mind :

It will begin to atrophy

It will eventually end

She lived her married life in fear

Trapped in her hopeless desolation

Locked in an inescapable prison

She spent her time cowering him

She is forced to worship the demon

Who declares himself as her God

Who offers her nothing but raw

Excruciating stings on her skin

The one she wore with joy and longing

Today she is suffering in painful whispers

She knelt on the floor and prayed

To be either killed or to be set free

From the living nightmare

She hopes to wake up from

Some day ; some nearly possible day

(Raise your voices against domestic violence.If you know anyone who is suffering abuse of any kind , do not hesitate to help him or her to get out of it as much as possible. Remember, she could be you )

Let these words remind you what made you cry

Because that's when you wipe them off and come back stronger

Late at night, she sat contemplating

by her Oak-wood table

Running her fingers over a bowl

Of blood that oozed from

The body of her beloved

Who perched by the edge of

He dared not query whose

Blood it belonged to

Grasping the other end

In a tight embrace

Late at night, sat a woman in red

Grieving for her darling,

She killed in dread

Once broken yet unbeaten

She picks up pieces of her

If envy was labelled as a mere emotion, I would have replaced its meaning with an unexplainable rage that I am feeling right now, watching other men and women touch her and ogle at her beautiful self. I don’t blame them but at the same time, I don’t like their hands on her. At all. Sipping my mojito (non-alcoholic of course)

I do my best to divert my mind off her, talking to other guests. Why the hell am I even here?

“Jealous, are we?” Lucy, the nice little receptionist teases.

“Nah, I just want to rip their eyes off. Been long time I haven’t killed anyone “I reply dryly to which she giggles.

“Aww you both are so cute!!!” she gushes on. “She’s so lucky to have you as a girlfriend”

The smile wavers from my face for a moment. “Maybe “I shrug my shoulders, looking at her smile wide at something whispered into her ears. Her eyes meet mine for a moment and she winks at me.

Taking it as some kind of indication, I put my glass down and march towards her in quick strides. Her eyes widen in warning but I don’t care. I push the guy murmuring to her as politely as I can and grab her hand.

“I need to talk to you ….in private” I squeeze her hand tight.

She doesn’t argue to my relief and I nearly drag her across the hall to the restroom upstairs. Locking the door, I turn to see her looking at me with a perfectly raised eye brow. Drinking in her view for few seconds, I just haul myself in her arms and kiss her pouty lips passionately. She kisses me back for few minutes and pulls apart.

“What’s gotten into you?” she looks amused.

“Just a bit jealous” I stroke her chin. “You can talk to them from a distance you know. No need to get touchy”

“You don’t get to order a domme darling” she warns me.

I bite the side of her neck and she hisses. “At times I do”

Swearing she grabs my shoulders and pushes me against the wall, “You don’t want me to punish you here”

Her voice gets throaty, turned on that she is.

I pull her closer and rub my breasts against hers, “I want you to make me come” I whimper.

She squeezes my left breast a little tight to cause that sweet pain. “Ask me nicely”

“Please……please make me come” I plead her, moaning.

Smirking, she crouches down and lifts my dress. “Whatever my Gem wants.”