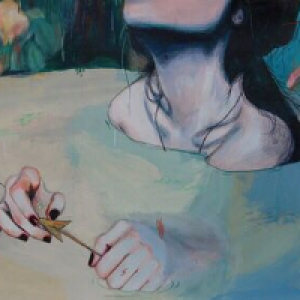 most everything i know is just shit i would like to forget.

Don't do it on the bus, on your way to work. Don't do it between bites of your food, on your cellphone. Don't do it late at night, when you can't sleep. Don't write.

Don't scribble notes on a napkin. Don't write about the things you see. And if you do, write? Don't you dare do it honestly. Don't do it brutally or candidly. Don't tell people the truth, don't give it to them raw and uncut. Don't write.

Don't pick up the pen, don't pick up the habit of picking up the pen. Don't press pen to paper and create anything, at all, not even a drawing, not even a doodle, not even a dot, but most especially: Don't write. Don't invest in pens and pencils like drug paraphanalia you keep on-hand just in case you need another hit, another fix, another emotional selfie of how you feel in this very instant and how it relates to everybody else. Don't scramble for a piece of paper to write on like you dropped a rock in the floorboard and need to stuff it back in your pipe, light it, and feel better.

Don't tell your friends you write. Don't tell your relatives. They'll just think it's weird, and if they don't think it's weird, they'll think they're a critic. They'll want to give you helpful advice, as an audience, but not helpful advice as a craftsman. They'll tell you it's easy to write. They'll say they could write a book, if only they had the time, like writing isn't its own work, like it's not a labor of passion, like it's not painful, and like their time is being spent so much better than your time spent writing. They'll ask if you've been published. They'll ask if you were published in anything they've heard of. They'll say you're no J. K. Rowling. Don't write.

Don't write; don't get good at it, for sure, then they might WANT you to write. And, then, by God, you might slip and fall into being a writer. Don't be a writer; don't write. To be a writer you have to be an open book and then you have to be an anatomy teacher, talking about all those things that people do; you have to spend hours reasearching and studying and observing and then you have to tell other people about it all. You may as well go be a rocket scientist or a doctor or a lawyer or a business executive. You'll get paid better and you'll definitely have food in your stomach. To be a writer, you have to dissect the actions of the people around you, you have to understand and explain and shock and awe, and you have to be entertaining, when you do it, like a clown with a scalpel. To be a good writer you have to be a self-dissecting-nearly-cadaver, keeping yourself alive, by some miracle, you Frankenstein, you freak of nature, you freak of nurture. You! Barely hanging on, and teaching the world about the delicate rhythms of your insides and showing them how it feels to be mutilated and to let yourself be gut over and over, again, and showing the world that you've somehow continued, somehow survived. Don't give them hope, you liar! Don't write! Don't you dare!

Besides, there's nothing worse than somebody wanting things from you and calling your skillset a gift and saying you should share it with the world for free, as if it's not a craft. They see writing everywhere, every day, why would they think it would be anything but natural to anybody? They see it on signs and in magazines, on newspaper stands, so, if you can write, then you should just write and you should just write everything for free, because they see writing all the time, in passing, for free, and it's just always around, right? They will take advantage of you: Don't write.

14
4
7
Challenge
Write a true micro-poem ... see specific details ... this is a think-piece.
According to Wikipedia, the more recent popularity of "micro-poetry" to describe poems of 140 characters in length or shorter appears to stem from a separate coinage, as a portmanteau of "microblogging" and "poetry". Hence this is the challenge, counting spaces, commas, periods and letters. Write a micro-poem no longer than 140 characters. (This does not include the title). It should not be any longer than 30 words maximum (though I have allowed for two additional words if needed.) but it should fall within the range of no more than 140 characters. It can be on any topic/subject. (I will be counting and spaces count as a character). Don’t forget to tag me in the comment section … @Danceinsilence.

at the art gala.

they try to define

9
4
2
Challenge
Pick a word or phrase with fifteen letters, and use it to write a 15-word acrostic poem. (one word per line)
It can be about anything, but it'll be more impressive if you can get the words to read like a full sentence. Feel-free-to-cheat-with-hyphens.

5
2
0
Challenge
There's nothing more painful than...

8
1
6
Challenge
Imagist/Minimalist poetry awakens our senses.
I invite you to write a short poem, using as few words as possible to describe a smell, a sound, or a taste. William Carlos Williams’ Red Wheelbarrow is a good example.

they find you with

your head blown out

down by the pond where

your step dad likes to fish.

the gravel has your bone fragments

brains scattered in it

the buckshot of your

nobody stopped the boy with

the shotgun and the

lawn chair and the

so, now, in the low dust

sorry for stealing your shirts.

you’re in that lawn chair --

the one you carried under your arm through the whole

with your neck bent back

and you’re slumped slightly to the side.

you could be sunbathing:

down by that funny, secret pond

in the center of all the houses

with the flowers all in bloom

in the low, electric buzz of

a: "People can't live on bullshit, Frank, it lacks the proper nutritional value. Besides, how the fuck would we get them to eat it?"

a: "Not enough. Make it about sex. All the ladies love shit on a stick."

Tried to love some things from far away.

Not impossible, maybe easier when you're

not responsible for those

More Ghosts of Us:

All those up close things that you used to

be able to watch grow and change

too big for you, now.