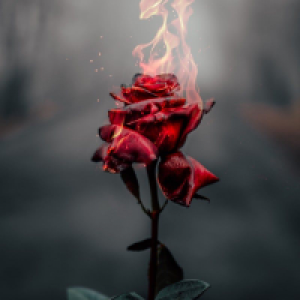 swelling through my limbs, calling

out thanks to my Lord

wild weather notions [ within the stillness of a hurricane

wired shoulders, in the moments speaking

not by strings fastened

but the center of a spine

painted things on the ribs

colored in eggshell and amaranth red

talk to me about the coral sunrise

coat me in light orange

of your watercolor depth

I stare at the profile of Kelly’s face until he finally turns back to me. “You know, there’s only an hour and twenty-eight minutes left,” he informs me, pointing to a clock above my head.

I crane my neck to look up at it. 8:32. “Oh, yeah,” I reply as I look back at him. I’ve finally decided, after much deliberation, that his hair is quite nice, but it looks better when it’s scruffier and not so neatly arranged. “How do you like the music?” I ask, tilting my head toward Naya Bloom, who’s still singing her love song.

He scoffs and leans against the gymnasium wall. “It’s not exactly party music. Like, not very good for dancing.” His eyes dart in my direction. “Not that I’d be dancing anyway, of course. Goodness, what torture.”

I laugh for the first time that evening. “Yeah, I don’t understand it. It’s just awkward.”

He shakes his head, a light smile playing on his lips. “Exactly. I can’t wait for this to be over.” His eyes flick above my head to the clock. “An hour twenty-six, then we’re outta here.”

“I wish they’d gotten someone less boring,” Kelly gripes from beside me, eyes on the stage.

“She’s not boring,” I say automatically.

He just shrugs and tries to push up his shirt sleeves. They fall down his arms, past his fingertips. He sloppily rolls them up so that his hands aren’t swimming in fabric.

I look out at the dance floor and push off the wall. “I think I should find Pearl,” I tell him as I drift away. He doesn’t try to stop me. But why would he?

I can’t find anyone but Jackson, who is talking to some junior girls I don’t know. He doesn’t look concerned that he’s lost the rest of his group, so I don’t even bother to ask him if he knows where Pearl is.

To my surprise, Amber finds me next. I’m at the edge of what I suppose would be called the ‘dance floor’--of course, it’s just the center of the gym--when she appears beside me.

“This dance is way more fun than I was expecting. I thought it was going to be boring as hell, but it has certainly gotten interesting.” She grins down at me, and, this close, I realize how tall she is. Not Sister Bertha tall, but still very tall.

I can feel my heartrate pick up. Pearl’s use of ‘God’ is one thing, but openly swearing on school property is not something I’m used to hearing. I think I must have visibly paled, because Amber says, “What’s your deal?” The devilish grin fades off her face, and she looks at me with piercing eyes.

I blink more than necessary as my brain searches for a response. “What?”

Amber jabs a thumb suddenly to the gym’s entrance. “Why didn’t you dance with that guy?”

My face is probably doing a pretty good lobster impression right now. “Um. No. He wasn’t.”

“Why were you watching me?” I ask. “Weren’t you dancing with Pearl? And where is Pearl?”

Amber leans back on her heels. “One, I wasn’t watching you; I’m just observant, thank you. Two, Pearl went to talk to Henry, who is having a panic attack in the bathroom. And three, I think that dude was totally flirting, because that’s what dudes do.” She fixes me with a look that says ‘it’s obvious’. “Unfortunately.”

“Wait. Henry’s having a...?” My eyebrows lower in concern. I don’t think Pearl ever mentioned anything like that to me about Henry. Then again, we almost never talk about Henry.

“Panic attack,” fills in Amber. Her eyes go wide for a second. “Ah. And Pearl told me not to tell Jackson because Henry doesn’t want him to know. Or something.”

Amber pats my shoulder. Not condescendingly, but naturally, like she pats a lot of people’s shoulders. “I have no idea, but it sounded like Pearl has it under control.”

“Shouldn’t we check?” I ask, somewhat shrilly, my feet already starting towards the doors.

Amber takes my arm. “Actually probably not. Do you think you’re the best person for Henry to see right now? If he’s trying to calm down?”

I stop short and wait for her to take her hand off my arm, my eyes narrowed in her direction. “What are you trying to say?”

She sighs. “You kind of worry a lot. I don’t think that’s the best vibe for him right now.”

I want to argue with her, but I can’t, because she’s right. “Well, what are we supposed to do, then?”

She smiles and overexaggerates shimmying her shoulders. “Dance? We’re at a dance. Henry will be fine.”

I chew the inside of my cheek. I don’t know a thing about panic attacks, so I don’t know if he’ll be fine. But he should be. Right? I have no idea.

Amber stills, watching me. “We don’t have to dance,” she says flatly, as if I’d been complaining about it.

“Maybe I’ll just go and stand at one of those tables,” I tell her, pointing to the standing tables on the left wall. She follows me to a table, and we find that it’s been left open because if you lean on the one side, the whole table leans with you. Cardboard seashells are scattered at our feet, too, having fallen off of the sides of the table. My arm sticks to one of the stray pieces of tape still adhered to the table’s edge.

We listen to another one of Naya Bloom’s songs, and I’m uninclined to speak. Amber scrolls through her phone and leans heavily on the table, despite its tilty-ness.

The whole time my mind is working on answering new questions, and old ones too. And I’m so wrapped up in my own thoughts that I not only surprise Amber, but my own self as well, when I ask, “So are you and Pearl, like, dating?”

don’t give me hope i don’t want it

i want to be forgotten

i’m not a poet

if you think you are

purging from my brain

excavated from my soul

I know you love me (I just don’t know why)

I look in your eyes,

sometimes when I hold you.

I falter then fall.

I try to make it right,

But you're two steps in front

And I'm two steps behind.

I make you crazy -

I draw you close;

I feel the heat of your body -

The heat of your angry skin.

I hold you closer, tighter -

I look in your eyes;

they tell me that you love me -

I just don't know why.

Coyote of your Soul

Can people see the Coyote of your soul as you walk past.

Does your shadow walk one step in front of you, or one step behind.

Do you walk in time with your skeletons, or do you slow dance with them in the moon light.

The Coyote of your soul watches over you, and your skeletons and always know what time it is.

Always remember the time is now.

And all the medicine that you'll ever need is right in your heart.

And if you listen to the wind , you'll hear the Coyote of your soul.

3
2
0
Challenge
re-written past
Alright, so here's the challenge. Take your oldest piece here on prose, blow the dust from it, polish it and give it another life. Show us what you started with here. You can refresh, change its length, or simply edit your work a bit (especially if it has been years since anyone had a chance to see it) or just leave it as it is because for you it's perfect. And tag me so I can see your entry ;) Ps. I will join in as well

AlisonAudrey in A Writer's Path
• 22 reads

Maybe not the first, but close enough.

Did you know that two days in a psych hospital costs

I have hit rock bottom many times, my dear.

For me, hope is the thing with feathers.

A motto a la Emily Dickinson.

I sat through those literature classes

And didn’t pay twenty grand for nothing.

in other people's eyes

~ unless i'm seeing them someplace else ~

the stripes of secret

~ written in song lyrics, in colors, in gazes and glances and tears ~

i find comfort in the

in other people's eyes

to feel not so alone,

to breathe in the air

~ open your eyes, let me see your sunset ~

At Night on the Stairs