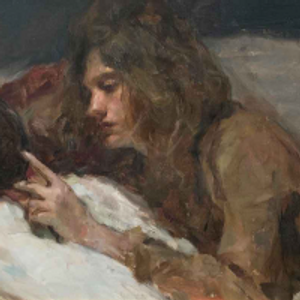 Follow
goldstar
tumblr and ao3- @frommyrottingbody if u like my writing <3 have a good day
21 Posts • 32 Followers • 1 Following
Posts
Likes
Challenges
Books
Challenge
Challenge of the Month XXXII
Write a short story: You have all the money in the world and no desire for a home. Make it gritty, make it beautiful. $100 dollars purse.

she pushed it away, but couldn't help the relief that settled in. she was rich.

she put an offer in on a house. this was her first port of call.

sobbing from the other end of the line. a lifetime of unresolved prayers and hopes without expectation falling through the speaker.

next, she put in her resignation.

she never needed to work again.

she bought a blue cadillac 1970 and drove down the coast. she visited everyone she never could before and checked into hotels every night.

"you're beautiful," she got told often by men through clouds of smoke. she'd started smoking treasurers and earned the compliments by a little bit of restoration. it started with that crook in her nose and all of a sudden she was a double d.

she giggled and blew clouds in their faces. they would buy her expensive things and give her contacts in exchange for her niceties. nothing she couldn't afford, but she liked feeling wanted.

"come on, what's the worst that could happen?"

he'd given her the number of a dealer after that night.

she developed a taste for coke and enjoyed tipping extra.

"why haven't you been answering my calls?"

she couldn't remember how she'd ended up in the gutter, but there she was.

"been busy," she mumbled.

"really? too fucking busy to text me once? i'm your best friend, if you can't talk to me who can you?"

she muttered a half-hearted apology and hung up before she could say anything else.

on the curb. she didn't know where the curb was, but she was sitting on it.

her head was starting to clear in the weak light of a rising sun. something had been settling in her the past few months. something terrible.

and on the side of the road it started clawing it's way up and she itched for something to hold it down. there wasn't anything left in her bag. she threw it on the road and screamed, short and strangled.

she found herself in a service station buying a pack of camels. she took a deep pull on one outside and remembered why she used to buy them.

she pushed it away, but couldn't help the guilt that settled in. she was lost.

5
1
2
Challenge
Insomniac Jots
A paltry spot to place one of those niggling tidbits which came un-asked-for in the dead of night. Fiction, non fiction, poetry, prose, self, contradiction... Anything goes.

it takes whole chunks under

it takes my heart in the dead of night

and smashes into me at 5pm

when i take my common route home

it takes my leg out and pauses

it realises i'm not what it usually eats

realises we weren't made for each other

it allows me to scream

it allows me to find the shore

i pull myself out coughing, choking

i kind of wish it had have killed me

because now i'll have this memory

this missing part of me

a fear of the ocean

god save the queen. long live the king. remember the pain they've caused.

1
0
0
Challenge
Tell me what went wrong
what the title says! can be poetry, free-verse, anything! Take a crack at it!

maybe i'll never know. maybe i was too young to remember. or maybe it's nature over nurture. what went wrong doesn't really bother me. i'm terrified of what might go wrong.

i'm so divine, so loveable. how could you not fall for me when i can fly? when i'm untouchable and life is so beautiful. when i'm above the clouds sucking juice from an orange, i'm a gallery of the most primordial joy.

when i stop flying and it turns out i was falling. i'm so desolate, so starved. how could you stick by me when i'm hurtling towards the earth in an arc of my own misery?

i promise something will happen. i'll go back to one of my vices, get too close to death. that's what could go wrong.

and then i'll be alone.

4
1
0
Challenge
Traces of Songs that stayed
The song that evokes you to go through your memory lane over and over again. A deep memory that was engraved somewhere you couldn't ignore. Either a positive or a negative one. Write about how that song became something so deep to you years later.

your dad must have been so sick of that song. of every time we got in the car and made him play it. peach juice dripping from our chins and arms waving around in the back seat.

we knew every word and every movement. we sang it when we couldn't hear it and it made us so happy.

i hope your dad's resting well. i hope one day you can eat another peach. i wonder if i'll always have to ward off tears when i hear our song.

10
4
2
Challenge
monologue only
Try and write a story or a piece with no detail, no places, no descriptions, and no context. the only thing you have is people talking. You may find this is a bit hard or maybe not. At the beginning please say if this is 1st, 2nd, or 3rd person. Also, try to make the title as vague as possible.

"what? why are you laughing?"

"no, but you listen. you look at me like i'm not wasting your time. like you're not waiting to get your point across or just tolerating me for someone or something else. i say stupid things and you don't hate me or forget about me, i'm just a person. not hatable or disgusting, just as human as if i were..."

"i don't know. if i were a guy i guess. sometimes i just feel like guys look right through me... i don't know."

4
2
0
Challenge
"You" in a Nutshell
If you were to write a headline or tagline about yourself (think of Nike’s “Just do it” or Apple’s “Think Different”), what would it be and why?

the kid that talked too much

loving, but self loathing

i know i don't know anything

that must be so frustrating

but religious in it's thinking

6
2
0
Challenge
Phrases and Sentences
If your life was to be summed up in a series of short sentences and phrases, what would you write? How would you condense your experience existing into a single paragraph, a single stanza of poetry too if that suits you?

how tragic, they loved each other

you're a kid, how does it feel

to know so much, and have no words

paranoid and riddled with insomnia

can abandonment be learned

or am i as terrible as i fear

so quiet, mature, a pleasure to teach

failing, giving up, crying too much

praying to someone dead

feeling everything that keeps me alive

will one day kill me

5
2
1
Challenge
Be a Man
What does it mean to “be a man”? As the world evolves with new levels of acceptance and gender neutrality, how can we define what it means to be a man? Or is it even something that can be defined any more, and then would be accepted by all? I’m very excited to read peoples definitions in any writing style.

you look at me and see me

you looked at your dad

and saw what you could be

you didn't want what he had

i helped you leave

you want to build a home

you allow yourself to grieve

you don't mind that i can't be alone

i think you know i'm a person

your eyes look at me truly

even when i feel my words worsen

i hope the world never changes you cruelly

2
0
0
Challenge
The First for Someone
Your character finds out that they were someone's first love. Fictional or nonfictional!

"you were in love with me?"

it was cold sitting outside the cafe instead of inside but it seemed to keep me present. i had had my suspicions about his side of our friendship, but i wasn't expecting it to be the reason for our sudden reconnection.

he sipped his latte and let the cup linger against his lips.

"you never said anything."

he looked at me for the first time since he'd admitted he never just wanted to be friends.

"i was scared. you were my best friend, i couldn't risk us."

he smiled. it didn't look forced, but it wasn't happy. he looked sad, almost sorry for me. i shifted uncomfortably and he moved his left hand, which reminded me of the ring.

he's not mine anymore. not my best friend who i loved for loving me.

he stood up and hung his jacket over his arm.

"come to the wedding."

he smiled again and i tried to return it.

i stayed sitting there until my drink had turned cold and pigeons started to feel comfortable to come closer.

was i in love with him?

i was crushed when i heard he was getting married. maybe that meant i was jealous of his partner.

i didn't love him though. not really. i loved that he loved me.

i sat in the guilt of realising my own selfishness. i felt like crying, but it wouldn't happen and i chided myself when the waiter came out and i quietly hoped they thought i was pretty.

i left and tried to decide if i would go to the wedding.