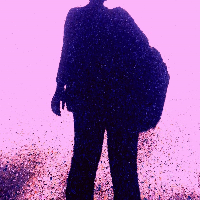 Of course it is not ok,

to see someone eat your lips

How much can my heart take?

Knowing this won't be the last taste

someone will do it again.

Its only a movie,

I'm too jealous to be swayed.

I still love you the same,

Of course it's not ok,

that I'm too stupid not to walk away

I wake up in the morning with a lot on my mind.

Every single memory is fighting for screen time.

After few minutes of bouncing in all directions.

all over again I fall deep in love.

Singing the song I wrote for you during christmas.

I let the tune play for as long as I can have it.

my mind is literally on fire.

I love you over and over.

From galaxy to galaxy,

I love you far and wide.

b'cos my love for you as no elastic limit.

No external force can create

for me not to return to my initial state.

The state of loving you

6
1
0
Challenge
Write about a holiday meal from the point of view of the turkey.

I came into this world in misery

and left it just the same.

I was never granted an ounce of dignity

or given my own name.

I was just a number on a plastic ring

clamped around my leg,

destined for nothing but a cruel death

from the moment I left my egg.

My beak was sliced with a hot blade,

making it hard to eat or breathe.

Still I grew so big, so fast

that I struggled to stand on my feet.

My legs finally snapped beneath my weight

leaving me to flail on the shit-stained earth.

No one tried to help me

for so little was I worth.

they threw us in trucks destined for the killing floor.

I was scared when I smelled blood

but thought maybe I wouldn't have to suffer anymore.

But the blades were dull and crude

from killing too many too fast

and when it came my turn to die

those dull blades made my suffering last.

My throat was cut shallow and quick

leaving me alive to see the end.

I watched paralyzed as one by one

the scalding tank boiled my friends.

I find myself on your table

while you all gather around to give thanks

by slicing into my tortured flesh

and pulling out a bone to break.

You do not question this tradition,

you just pass the gravy to pour

and it's clear to me that on Thanksgiving

there is nothing for turkeys to be thankful for.

It was the coldest,

floating in a glass bowl,

exposed to the elements.

It was a beautiful day.

the way it would

My dad was ashes,

heavier than I expected,

in a plastic box

inside of a bag.

to invade me raw,

and left me brittle,

ready to be a mote

the roads were empty,

My father had his

meat to be chopped

on the butcher's block,

I have learned forgiveness.

At the end, it was me

who had the butcher's knife,

the power to sever,

to coat my apron

but I am dressed in white

and I am clean.

Memories of a Man I Knew

Challenge: Write about your relationship with your father, whatever it might be.

My father showed up regularly. He loved me then.

My father showed up less. He knew the only way he could hurt my mother was by hurting me. She had broken the crimson cushion beneath his breast, and now it was his turn to break mine.

I had been awarded student of the month. Excitement poured from my beaming body as I saw my mother, grandmother, and aunt enter the building just moments before the ceremony.

I was showered with hugs, kisses, and gifts. I had been holding onto my mother when I saw him; a man that looked vaguely familiar. I struggled to guess who he was as he approached with flowers in hand. I turned to my mother and asked her, "mommy, is that my dad?"

She forced a smile upon her full lips and said, "yes!"

I smiled brightly and hugged him tightly. It's funny how children love their parents no matter how unfamiliar they are with them.

I had been hit by a car on my way from the ice cream truck. I laid in a hospital bed with my mom looking over me. My father had come, but he wasn't actually there. His eyes were on his watch.

And with that, he was gone.

I was seeing my father more regularly; he'd show up about three times a year at least. I felt like this could be it; this could be the beginning of him and I forming a beautiful relationship.

My father had gotten a divorce and only told me once he had gotten a new girlfriend. He took me on what he called a "family trip." He was acting as if he had been there; as if he had co-parented with my mother for fourteen years and helped raise me.

I decided to talk to him. It was late, and I could not sleep with it on my mind. I climbed down the stairs and went into his room. The conversation didn't go well and ended with me running out in tears. I went into the bathroom instead of into the guest room with the fear that he would come after me to continue the conversation. When he never did came for me, I was, ironically, more hurt.

I cried over him from time to time.

I hated him from time to time.

I did not think of him much.

"Dad, I just want to have a good relationship with you. You know?"

There is a long silence before he says, "well, what's stopping you?" He's smiling. He truly didn't get it, and could I blame him? He never had a father, but is that an excuse? I am not sure. I am just silent.

He tells me that he is proud of me; proud that I finished high school. For some reason this makes me smile.

I ask for his help. He is better off than my mother, and I wanted to go to college. He tells me he'll try, but he's not sure if he can. I tell him anything will help.

He never calls; not to say he couldn't help out, not to see if I was okay.

I decide that I am done.

I will not try. I do not care or maybe I do; I am just to exhusted to even notice.

7
1
6
Challenge
In fifteen words, why does the human species deserve to survive?

deserve is a funny word...

To thrive? or to survive?

That is Nature's iron rule.

16
4
2
Challenge
In fifteen words, why does the human species deserve to survive?
camlexndr
• 38 reads

we are undesrving of this extraordinary world that we are so effortlessly destroying beyond repair.

If every human were given a deadly virus, the world would live on, unimpeded.

Heck, let's be honest: It'd be better off really.

Is that wishing you were never thought of

so that she may

Then I am unfamiliar.

My college roommate informed me of a bird

Bashing its skull into our bathroom window

Like maybe It just wanted its beak to be broke…

& i didn’t quite believe it until 2 days before the inauguration.

I was stationed on the throne & a tapping turned my head.

Like it was a sad eagle trapped in a cycle of some dumb bird.

The day of the inauguration, A storm hit southern california.

& in broad daylight, all the wind & the rain Uprooted

any growing thing in sight, The might of which

built a wall of broken limbs In front of the library.

Outside was an overcast ocean of trees turned into casualties

& with so much destruction, this christian university

Looked akin to the beginning of the apocalypse.

See, i didn’t want to grant

The majesty of being crowned the antichrist

But that storm built a wall blocking the library

I think of that bird bashing into glass.

I didn’t see it for weeks.

Just went to class, went to the cafeteria,

A blonde boy walked in

I lost my appetite. Went to the parking lot.

Pecking its reflection in rearview mirrors

Flying into itself over and over, looped.

I wonder what they did with the branches blocking the library.

I wonder if maybe they built a nest.